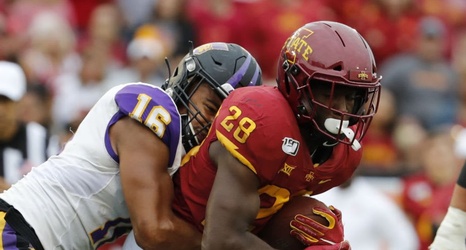 AMES, IA - AUGUST 31: Defensive lineman Elerson Smith #16 of the Northern Iowa Panthers tackles running back Breece Hall #28 of the Iowa State Cyclones as he rushed for yards in the second half of play at Jack Trice Stadium on August 31, 2019 in Ames, Iowa. The Iowa State Cyclones won 29-26 over the Northern Iowa Panthers in triple overtime. (Photo by David Purdy/Getty Images)

The NY Giants continued to bolster their pass rushing unit in the NFL Draft, selecting Northern Iowa’s Elerson Smith with their fourth round pick.

The edge rusher possesses unique potential for a day three pick, due to his athleticism and size.