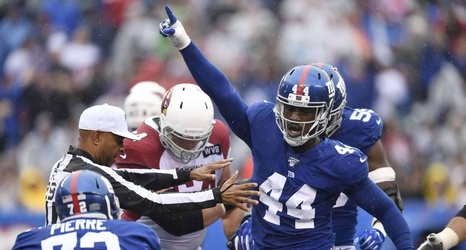 Markus Golden is returning to where his NFL career commenced.

According to Tom Pelissero of NFL Network, the New York Giants have traded the edge rusher to the Arizona Cardinals. Golden began his career in Arizona when the Cardinals selected him in the second round of the 2015 draft.

The Giants have reportedly received a 2021 sixth-round pick in return.

The #Giants traded OLB Markus Golden to the #Cardinals for a 2021 sixth-round draft pick.

Golden signed a one-year deal with the Giants prior to the 2019 campaign, a season in which he led the team with 10 sacks and was by far Big Blue’s top pass rusher.