New York Giants RB Saquon Barkley on return to form: 'This is the guy I know' 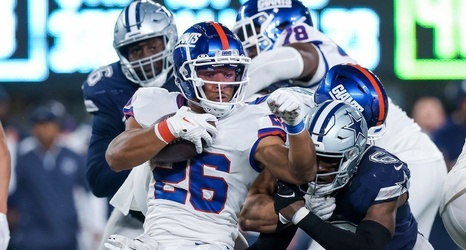 East Rutherford, N.J. -- The rookie year version of New York Giants running back Saquon Barkley has returned. He can see it when he watches film of himself the first three weeks of this season.

Barkley is second in the NFL with 317 yards rushing and two touchdowns on a healthy 6.0 yards per carry.

"Yeah, not to be arrogant but when you see plays like when I went back and watched film on the touchdown run I had on Monday, making that jump cut inside a hole, making those two guys miss and finding a way to score, those are plays where it just puts a smile on your face when you're like, 'That is the guy I know,'" Barkley said on Thursday of his 36-yard touchdown run against the Cowboys.