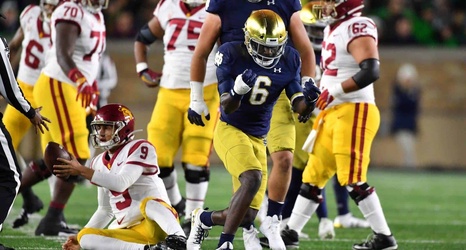 Jeremiah Owusu-Koramoah is a versatile linebacker who has not only proven to be a premier run-stopper, but also a talented pass-rusher. The former quality would allow him to be a great complement to Blake Martinez while the latter would lead to him working well alongside Leonard Williams.

But it doesn’t just stop there.

Owusu-Koramoah additionally carries the ability to line up in the slot and make plays in coverage. Adding another talented body to a pass defense that’s already loaded heading into the 2021 campaign would be highly beneficial for Patrick Graham’s defense and could fill a multifaceted role the productive defense may be missing.