New York Giants: Daniel Jones Has A Lot To Live Up To in 2020 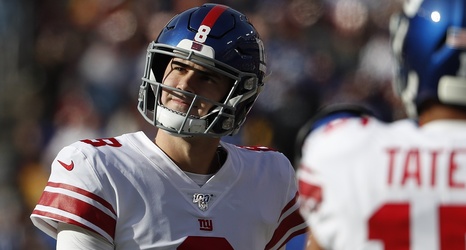 The former 6th overall pick on the surface had a good rookie campaign and is looking like he is a franchise QB. The TD: INT ratio looks good and a decent completion percentage seems like he is poised for stardom. The New York Giants perceived issues lie in the O-line and in the defense, which while they are reasonable things to critique, I’d say that Daniel Jones has a lot he needs to do in 2020 before he’s off the hook as well.

When you think of turnovers for a QB New York Giants fans probably sit back and laugh at Baker Mayfield or Jameis Winston turning over the football a lot, but in terms of TDs+Lost Fumbles (so total Turnovers), Daniel Jones turned over the ball as much as Baker Mayfield.