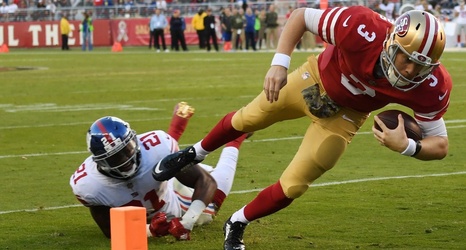 C.J. Beathard of the 49ers dives into the endzone for an 11-yard touchdown against the Giants at Levi's Stadium on Nov. 12, 2017, in Santa Clara, Calif. Credit: Getty Images/Thearon W. Henderson

MIAMI – Jimmy Garoppolo was still relatively new to the 49ers in the middle of the 2017 season, so much so that he wasn’t even playing for them yet. He’d arrived from a team that won a lot and usually showed very little emotion when it did. So when he walked into the locker room following a Week 10 victory, he was a little shocked by what he saw.