Grading the Giants in NFL Week 14 vs. Los Angeles Chargers 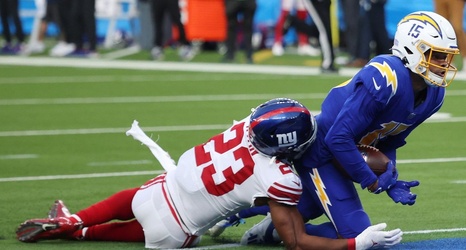 Jalen Guyton of the Chargers catches the ball in front of Logan Ryan of the Giants for a touchdown during the second quarter at SoFi Stadium on Sunday in Inglewood, Calif. Credit: Getty Images/Ronald Martinez

If Saquon Barkley was ever going to break out of his slump, this game against the 31st-ranked run defense seemed like it would be the time. Nope. Barkley managed just 64 rushing yards on 16 carries and 95 yards from scrimmage thanks to some late-game stat padding (he also caught a TD). Mike Glennon and his receivers took turns botching plays; the backup QB would put the ball on a receiver who would drop it (Darius Slayton, Evan Engram) or have a target wide open and miss him badly (Kenny Golladay, Devontae Booker).