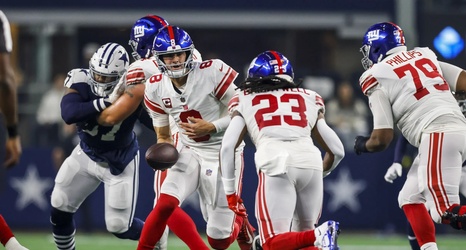 The New York Giants slipped to 7-4 on the season Thursday after falling to the Dallas Cowboys 28-20 in a tough Thanksgiving road game.

This was a game the Giants were always expected to lose, and were 10-point underdogs by the time the game kicked off. They were ultimately able to cover the spread and make it a one-score loss, but it was still managed to be a disappointing loss.

The Giants were seemingly poised to stun Dallas when they went into halftime with a 13-7 lead. But then the flow of the game flipped and Dallas used a more measured offense to limit mistakes, pulling away over the second half.