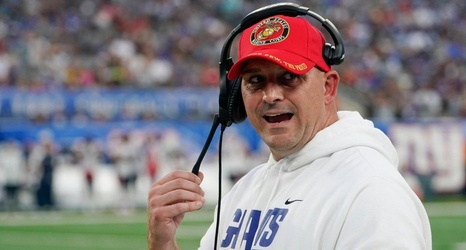 Giants head coach Joe Judge calls out to his team during the first half of an NFL preseason game against the Patriots Sunday, Aug. 29, 2021, in East Rutherford, N.J. Credit: AP/John Minchillo

There were very few big recognizable names who were shown the door on Tuesday when the Giants, like all other NFL teams, had to trim their roster from 80 to 53 names. Sure, there were some players who people might have heard of parenthetically. Running back Corey Coleman was a Super Bowl hero for the Eagles and is now a former Giant. Linebacker Ifeadi Odenigbo received a $1 million signing bonus when he arrived in the spring but has departed without playing a meaningful snap.