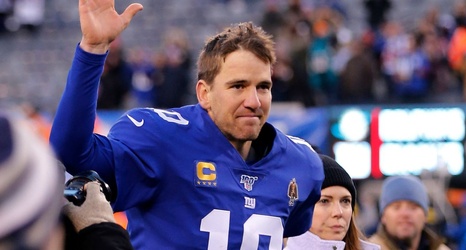 Eli Manning retired from the Giants and the NFL on Friday morning.

But before he could step to the podium to give his remarks, Giants co-owner John Mara had one more retirement announcement to make: Eli's jersey.

"You will always be the ultimate Giant," Mara said, adding that Manning will be added to the Giants' Ring of Honor next season. "No Giant will ever wear No. 10 again."

Manning won two Super Bowls for the Giants, beating the Patriots each time and winning the MVP each time. Manning is the only player in franchise history to suit up for 16 seasons and his 236 regular-season games (234 starts) and 248 total games are both Giants records.