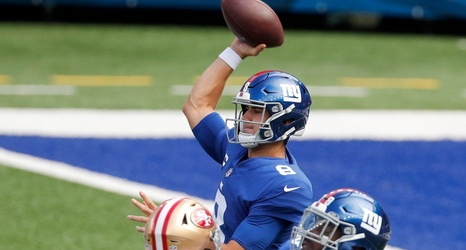 Daniel Jones #8 of the New York Giants throws a pass during the first quarter against the San Francisco 49ers at MetLife Stadium on Sunday, Sep. 17, 2020 in East Rutherford, New Jersey. Credit: Jim McIsaac

Jason Garrett said he is not worried about Daniel Jones’ propensity for turnovers lingering much longer, even as the quarterback has six in three games so far this season and 30 in his 16 career NFL appearances.

"I think this is just something that the more he plays, hopefully the better he gets at it," the Giants’ offensive coordinator said on Thursday.