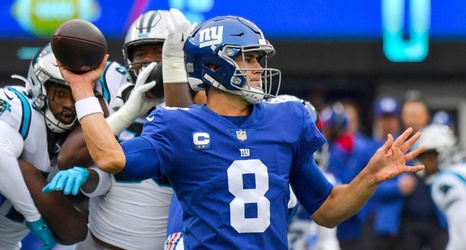 EAST RUTHERFORD, N.J. -- It was already established that New York Giants quarterback Daniel Jones could run and throw. Now it's apparent after the play he made Sunday against the Carolina Panthers that he can catch as well.

Jones made a leaping, one-handed catch late in the third quarter of Sunday's matchup with the Panthers at MetLife Stadium. It went for a 16-yard gain on a drive that ended with Jones throwing a 5-yard touchdown pass to Dante Pettis to give the Giants a 12-3 lead.

The Giants quarterback handed off to Devontae Booker on his first career reception and ran toward the right sideline.