Ex-Broncos RB Montee Ball: ‘We should obviously come out with a W’ 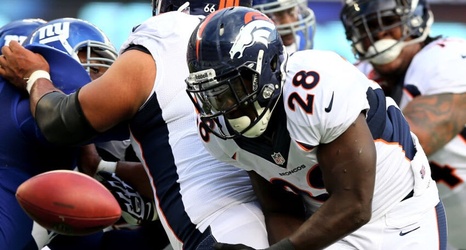 Montee Ball of the Denver Broncos fumbles the ball in the endzone in the first quarter against the New York Giants at MetLife Stadium on September 15, 2013. (Photo by Elsa/Getty Images)

With week 1 just days away from being fully underway, former Broncos running back Montee Ball didn’t hold back on his expectations for Denver’s week 1 showdown with the NY Giants.

Ball says he believes the Giants are a “cakewalk” on Broncos Breakdown.