Daniel Jones has eye-popping stats, but nothing to show for it 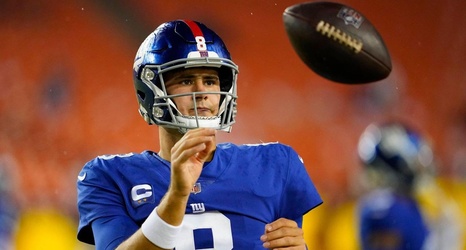 Giants quarterback Daniel Jones catches the ball before the start of an NFL game against the Washington Football Team on Thursday in Landover, Md. Credit: AP/Alex Brandon

There are lots of things Daniel Jones has proven he can do just as well as just about anybody in the NFL. His 516 passing yards have him sandwiched neatly between Baker Mayfield and Jimmy Garoppolo in the top half of the league’s rankings. His 122 rushing yards are the third most among quarterbacks, trailing only Lamar Jackson and Jalen Hurts. You can even make the case that Jones is the most complete package among any of his peers around the league.