After interception vs. Browns, Giants' Quincy Wilson placed on IR with ankle injury 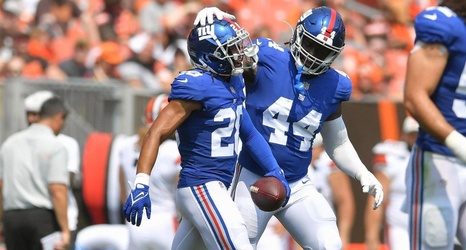 Cornerback Quincy Wilson #28 celebrates with defensive end Ifeadi Odenigbo #44 of the New York Giants after Wilson caught an interception during the second quarter against the Cleveland Browns at FirstEnergy Stadium on August 22, 2021 in Cleveland, Ohio. Credit: Getty Images/Jason Miller

Creating a preseason turnover on defense is usually a good way to make the team. The last two Giants to head down that path have had very different results, however.

Quincy Wilson, who had an interception Sunday against the Browns, was placed on injured reserve Tuesday as the Giants trimmed their active roster from 85 to 80 by the 4 p.