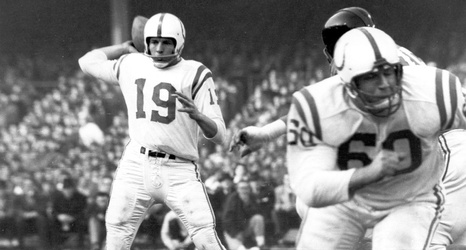 BALTIMORE -- The football that Johnny Unitas threw to Raymond Berry for a touchdown in the historic 1958 NFL Championship game is being sold at auction.

Known by many as "The Greatest Game Ever Played," the duel between the Baltimore Colts and New York Giants was the first NFL title game to extend to sudden-death overtime. Berry caught 12 passes for 178 yards for the Colts in their 23-17 victory.

His 15-yard touchdown reception in the second quarter was followed by a conversion kick, and the ball was caught by a fan in the stands.