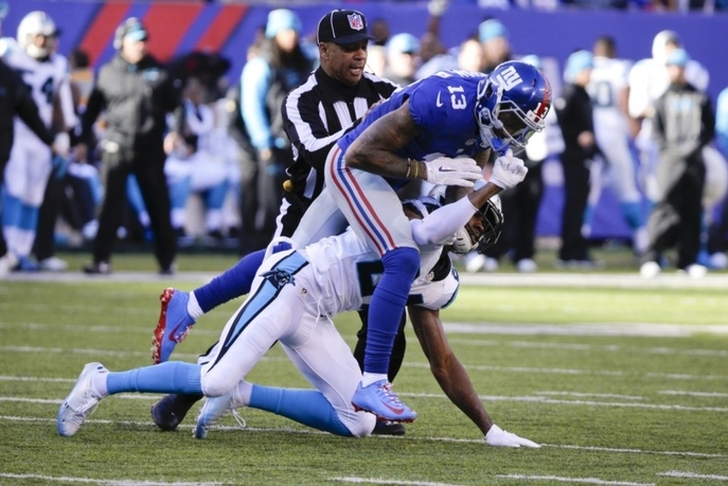 The previous report by ESPN's Ron Jaworski's is incorrect, as the NFL announced Wednesday that Beckham's suspension will be upheld.

It now appears that New York Giants wide receiver Odell Beckham Jr. will not be suspended one game for his actions against the Carolina Panthers on Sunday.

Per Ron Jaworski of ESPN:

BREAKING NEWS: Odell Beckham suspension to be OVERTURNED! (Per sources in NYC) Wow!

Jaworski did say that the ruling isn't official just yet, but he didn't backtrack off the statements when pressed. Beckham was at the NFL's headquarters on Park Avenue in NYC on Wednesday to appeal his suspension.

Beckham drew three personal fouls Sunday. OBJ and Panthers CB Josh Norman had been chirping and shoving each other all afternoon. The worst action on Beckham's part was when he deliberately targeted the earhole of Norman's helmet on a head-to-head hit.

In a letter to Beckham, NFL VP of Football Operations Merton Hanks wrote, “At numerous times during yesterday’s game against the Carolina Panthers, your actions placed a fellow player at unnecessary risk … and clearly did not represent the high standards of sportsmanship expected.”

Norman was infuriated with Beckham and made that know in postgame interviews: "The guy ran 15 yards down the field, dead-on collision,'' Norman said. "The play was all the way to the left side. He came back and was hunting, and it was just, like, malicious in every way."

The Panthers CB was fined more than $26,000 for two incidents in the day-long battle with Beckham. Those fines weren't related to yesterday's report that Beckham was the target of homophobic slurs and felt threatened by a baseball bat that was brought to field and allegedly pointed at him, but were for both a blatant facemask and a strike to Beckham's neck and head area.

We'll have more on this report as additional information is made available.