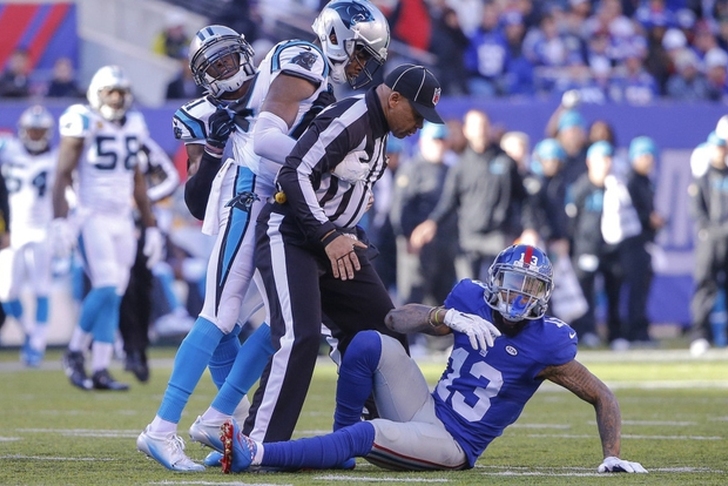 So much for slotting in New York Giants WR Odell Beckham Jr. into your fantasy playoffs lineup for this coming Sunday.

A report by ESPN's Ron Jaworski citing sources that said OBJ's one-game suspension would be overturned has been proven incorrect, as the league announced on Wednesday afternoon that Beckham's one-game suspension for multiple on-field transgressions in the team's game against the Carolina Panthers this past Sunday has been upheld.

The NFL's original reasoning for the suspension were Beckham's "multiple violations of safety-related playing rules," including a blatant helmet-to-helmet shot to Panthers CB Josh Norman. Norman and Beckham were chirping at each other all game, leading to multiple on-field skirmishes -- including a Norman facemask and blow to Beckham's head/neck area which drew over $25,000 in fines on Wednesday.

Beckham's suspension appeal was heard on Wednesday in New York City. There were accusations from the Giants' side regarding the use of homophobic slurs and threatening motions made with a baseball bat carried by Carolina on the field as a symbol of "bringing the wood." Panthers practice-squad player Marcus Bell was caught on video getting into an altercation with Beckham during warm-ups while holding the bat.

However, the league maintained its stance that Beckham's on-field actions during his skirmishes with Josh Norman were too much to write off and overturn his suspension for Sunday's game against the Minnesota Vikings.

More on this as the story develops.