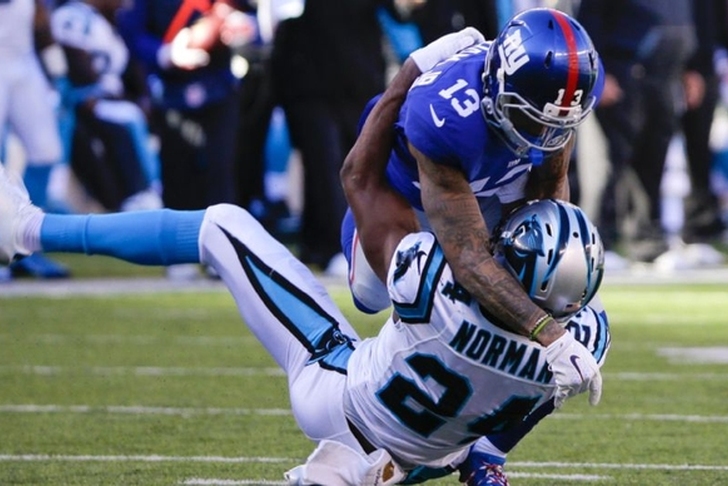 New York Giants WR Odell Beckham has been suspended by the NFL for one game for his actions during the team's game against the Carolina Panthers. Beckham was flagged for three personal fouls and targeted the helmet on Panthers CB Josh Norman. Now there are reports that Beckham's behavior stemmed from the Panthers' use of black baseball bats and threats made by the Panthers.

The Giants are convinced that Beckham was physically threatened and was called homophobic slurs by the Panthers. However, Carolina deined that there were any threats or slurs.

Ian Rapoport reports that a Panthers' practice squad member had to be separated from Beckham before the game. Marcus Ball was allegedly holding a black bat at the time. Jay Glazer reported something similar, although no name or bat was mentioned.

The Panthers have used bats throughout this season, as a motivational tool. It was started by CB Bene Benwikere, and the ritual was continued after Benwikere went down with an injury.

It's far from the first time a team has used a baseball bat as motivation. The New Orleans Saints used one before the Super Bowl.

Pro Football Talk spoke to a source from the Panthers who claimed the whole ordeal is just “Giants are trying to distract from Beckham’s antics.” Mike Florio called the situation "a red herring."

The NFL has not started an investigation into the claims about the Panthers'. It's unclear if they will do soon at any point.