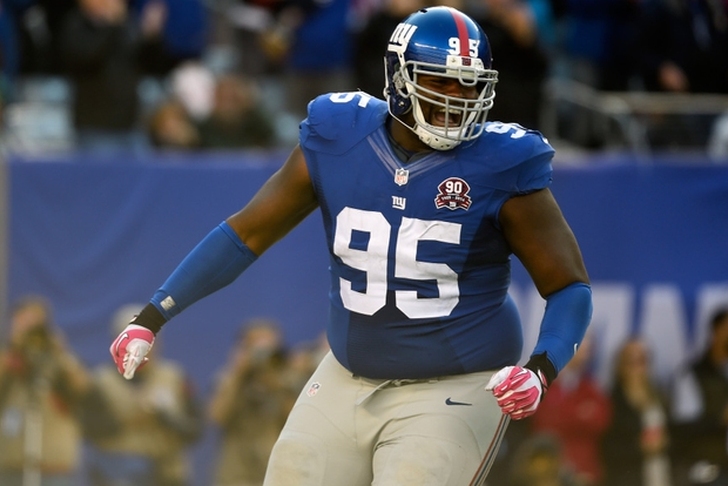 NFL free agency is well under way and the New York Giants have found themselves at the center of several rumors. The Giants made a few moves early in free agency, notably nabbing WR Brandon Marshall and re-signing DE Jason Pierre-Paul to a large deal. With the NFL Draft coming up, the Giants aren't done yet and there's a notable free agent they're still hoping to bring back. Here are the latest Giants news and rumors you need to know.

1 of the top FAs -- #Giants DT Jonathan Hankins -- has tried for weeks to beat NYG's standing offer. Hasn't done it yet. They want an answer

Hankins reportedly wanted a deal upwards of $10 million per year, but perhaps unsurprisingly, has yet to get that type of offer. The longer Hankins goes without signing, the more likely it is he returns to New York.

Jared Odrick A Backup Plan?
If the Giants don't bring back Hankins, veteran defensive lineman Jared Odrick might be the backup plan for New York.

FA DE Jared Odrick, who passed a physical on his #Patriots visit, is one to watch on if #Giants don’t get Hankins back. He’ll take visits

Odrick was released by the Jaguars after being limited to just six games because of injuries. The former first round pick will draw plenty of interest and since he was released, there's the added bonus of not counting against compensatory picks.

Giants Want A Power Back?
The Giants have Paul Perkins as one option long-term, but he might be better suited in a scat-back/third down role. It shouldn't be a surprise, then, that ESPN's Jordan Raanan reports the Giants want a power back. And there's a big name Raanan mentions.

The Giants have been quiet on the running-back market. They haven't really looked into any potential options, even after cutting starter Rashad Jennings last month. But I've heard they do want to add a physical, power option to complement Paul Perkins. So maybe they look for a bargain back as the process moves along, and LeGarrette Blount would be a nice option. He's the kind of back who can get them the tough yards near the goal line and in short-yardage situations. The Giants definitely need that. The longer Blount remains on the market, the more likely this is to happen.

The Patriots are still in good shape to bring back Blount, but if the Giants are willing to offer a little more money, perhaps they could pull him away. A Blount-Perkins tandem could be exactly what the Giants need at running back.

Follow our New York Giants team page for all the latest Giants rumors and news or download the Chat Sports App!