Giants Hold On For Narrow 21-20 Win Over Bengals 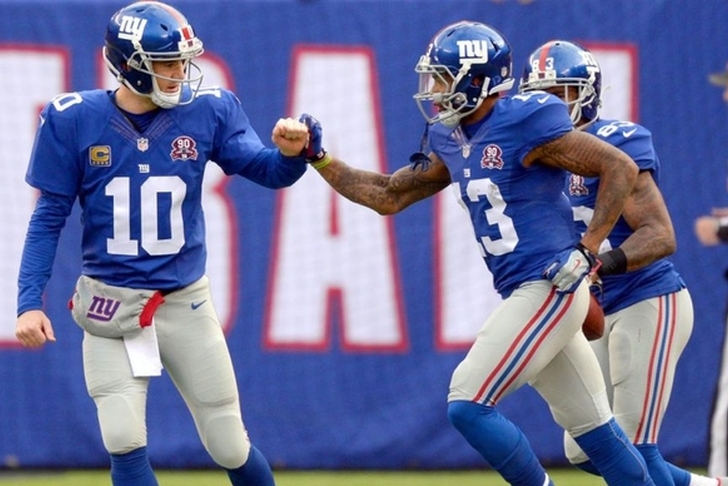 The New York Giants stayed hot, using big games from Eli Manning and Odell Beckham Jr. to pick up their fourth straight win with a 21-20 victory over the Cincinnati Bengals on Monday Night Football.

While those two stole the headlines, it was New York's defense that held firm and and preserved the game in the 4th quarter. Safety Landon Collins recorded an interception and the Giants recorded two sacks on Cincinnati's final drive.

New York started fast, going the length of the field on their opening drive that resulted in a 10-yard touchdown pass from Manning to rookie tight end Jerell Adams. However, Cincinnati responded with a touchdown on the ensuing drive, as A.J. Green caught a 13-yard strike from Andy Dalton.

From there, the defenses held firm for most of the remaining half. The Bengals managed to get a field goal, but another touchdown wasn't scored until there was a minute left in the second quarter. Manning hit Beckham with another 10-yard touchdown, giving them the 14-10 lead at halftime.

That lead lasted all of a minute into the second half, as a Jeremy Hill touchdown run gave the Bengals the lead back. Another field goal in the third quarter made it 20-14, but their offense would struggle mightily after that. That opened the door for a Giants comeback, and on a 4th & Goal early in the fourth quarter, they capitalized on a short touchdown from Manning to rookie Sterling Shepard.

From there, the defense took over to hold onto the 21-20 victory. Manning passed for 240 yards and three touchdowns with two interceptions, while Beckham reeled in 10 passes for 97 yards and a score.

For the Bengals, Dalton finished with 204 passing yards with a touchdown and an interception. Tight end Tyler Eifert was their leading receiver with 96 yards on three catches, while Green had 68 yards and that touchdown on seven catches.

New York, now 6-3, will host the Chicago Bears next Sunday. Cincinnati drops to 3-5-1 on the season with the loss, and will try to get their season back on track at home against the Buffalo Bills next weekend.