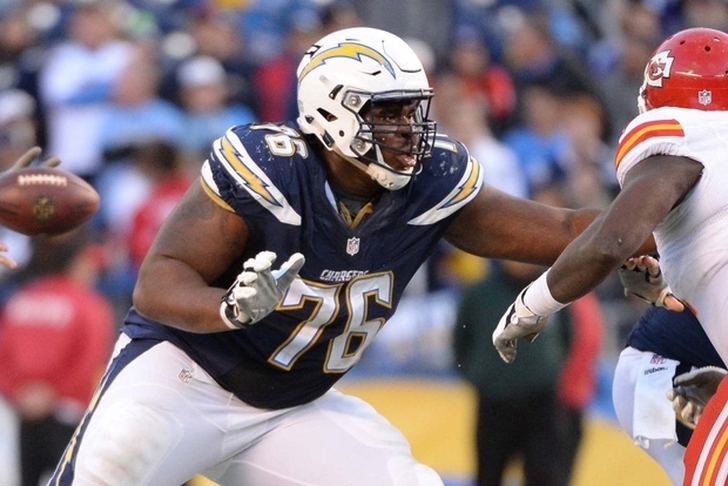 NFL free agency is just a few days old, and the New York Giants have been busy, signing wide receiver Brandon Marshall and offensive lineman D.J. Fluker. However, they are still ramping up their efforts to fill some needs after the initial free agency frenzy. Here are the latest Giants news & rumors you need to know:

#Giants OL DJ Fluker: I was brought into New York as a right guard, but I'm willing to play anywhere on the line if they need it

#Giants OL DJ Fluker: The Giants made me feel right at home and have a winning tradition. That made all the difference for me

The Chargers had picked up Fluker’s fifth-year option, which was worth $8.821 million for 2017, but that salary was not guaranteed. Fluker has started every game he has played in his four-year career.

Giants targeting O.J. Howard in the draft?
The Giants have plenty of directions they can do in the draft, but they have been heavily linked to Alabama tight end O.J. Howard, who Pro Football Focus expects them to take:

This move is all about loading up on playmakers for the Giants’ offense. They already brought in former Jets WR Brandon Marshall to pair with Odell Beckham, Jr. and Sterling Shepard, and Howard adds a middle-of-the-field complement to the strong receiving corps. Howard wasn’t used often in the passing game at Alabama, but has the size and speed to stretch the seam; he averaged 7.1 yards after the catch per reception over the last three seasons.

Keenan Robinson leaving the Giants?
One of New York's better defenders from last year, linebacker Keenan Robinson, isn't expected to re-sign with the team and is visited the Bengals earlier this week, according to SB Nation's Ed Valentine.

The New York Giants desire to keep as much of their dominant 2016 defense together as possible, could be on the verge of receiving a significant blow. Linebacker Keenan Robinson, a key member of the Giants’ nickel packages, is reportedly traveling Monday to visit with the Cincinnati Bengals.

Robinson came to the Giants in 2016 on a one-year deal. He started only six games, but played 782 defensive snaps, or 71 percent. Robinson’s coverage ability and his pursuit in run defense helped the Giants. His 76.5 coverage grade was 33rd among linebackers graded by Pro Football Focus. That may not seem like much, but considering the difficulties the Giants have had over the years covering running backs and tight ends, it was significant.

Robinson had 83 tackles in 16 games last season, including six starts.

Follow our New York Giants news page for all the latest Giants rumors!