Cowboys vs. Giants: 3 Things We Learned From Each Team 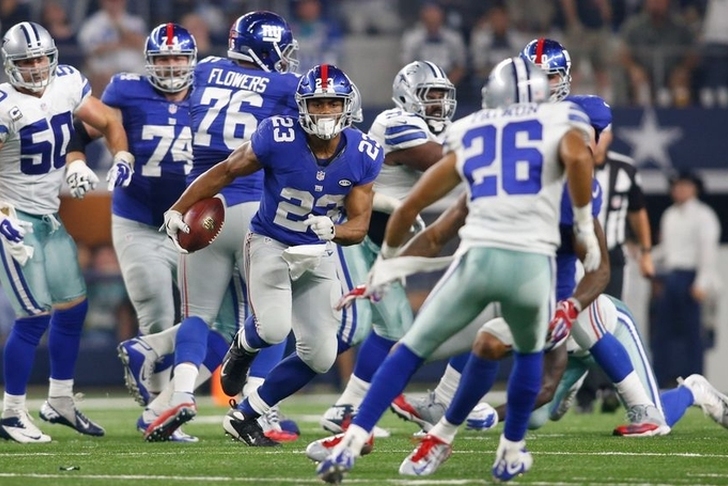 The New York Giants picked up a crucial NFC East win by defeating the Dallas Cowboys 27-20. The Giants are now 4-3, while the Cowboys continued their slide by committing four turnovers. Here are three things we learned from each team in the Giants' win.

All we heard leading up to the game was that Christine Michael was going to get more carries. And when Joseph Randle went down, it looked like it was Michael time. As is it turns out, that may have just been classic misdirection. McFadden took the bulk of the carries and racked up 152 yards and a score on 29 carries. He showed why he was a high first round pick and that he can still play. Even if Randle returns soon, it might be McFadden's team.

2. Cassel Can't Turn The Ball Over

This is obvious, but Cassel must limit his turnovers. Three interceptions is far too many for Cassel and it looked like he didn't have much arm strength on his deep balls. While he did make a few plays, something Brandon Weeden failed to do, Cassel must cut down on the mistakes.

Another loss with Tony Romo and Dez Bryant out has put Dallas in serious trouble. Now 2-4, the Cowboys face an uphill battle until Romo returns. This was a game Dallas could have won, but were doomed by four turnovers. Until the offense starts to show some consistency, especially through the air, the Cowboys are going to continue to come up short.

1. Running Back By Committee

The Giants ran a classic committee against the Cowboys. Shane Vereen, Andre Williams, Rashad Jennings and Orleans Darkwa all had between four and eight carries. Vereen and Darkwa were by far the two most productive and wouldn't be surprising to see them get more of touches as the season continues.

The win over the Cowboys is a big one for the Giants. They couldn't afford to lose both games to Dallas this season. Last week's loss to the Philadelphia Eagles doesn't help things, but the Giants are still in a strong position. The NFC East will come down to the wire and the Giants can make a run at the title.

3. Defense Can Step Up

The defense (and special teams) stepped up in a massive way against the Cowboys. It's a promising sign that the Giants can win a game with Eli Manning completing only 13 passes for 170 yards. The Giants' last two touchdowns came from special teams and defensive scores, and it's the reason the New York won.