Is the New York Giants season over? 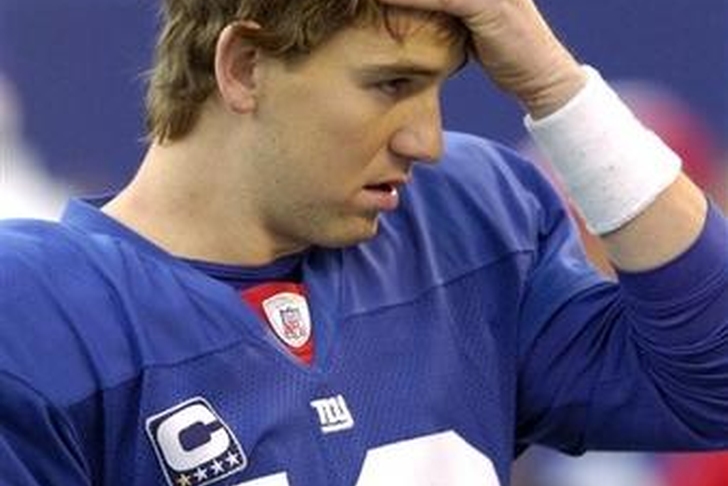 If you have been watching the Giants this season the answer to the question would clearly be yes, their season is over. They are off to an 0-5 start and haven't really been close in a game since week one against the Cowboys. This week against the Eagles figured to be a get-right game for the Giants, as the Eagles had struggled mightily since week one, but the Eagles, and their backup quarterback Nick Foles, picked apart the Giants and won by 15 points. All of this points to the Giants being done this season, but I'm here to tell you they may not be done just yet.

You're probably thinking to yourself "this guy is out of his mind," "how could he say the Giants are possibly still in the playoff race?", and these are all justified thoughts, but if a couple of things go the Giants way, they could be right back in the race pretty soon. The main reason the Giants are not out of the race is because of the dreadful division they play in. The NFC East is full of bad teams, and because of that the Cowboys and Eagles are tied for first place with a record of 2-3. The Redskins are 1-3 a half game back, and the Giants are only two games back of the division lead, having not won a game yet. If the Giants were in the NFC South they would probably be thinking about the 2014 NFL draft, but it looks as though the NFC East could be won with an 8-8 or possibly even a 7-9 record. Having said all that, the Giants cannot win the division if they don't straighten things out on the field, and win a game first.

Much of the reason for my optimism is that the Giants have some great players on their roster who are underperforming, and they have players who have won in the National Football League before. Eli Manning is a prime example of this. He is a two-time Super Bowl MVP, and as of right now leads the league in interceptions with 12. Although I believe the majority of Manning's interceptions were not on him, 12 is still far too many, and you can't win when turning the ball over that much. Manning has a great receiving corps to throw the ball to, but they haven't been on the same page enough this year.

David Wilson is an interesting case. You can't exactly say he is underperforming because he hasn't put together a body of work that makes you think he will be a great running back, but his talent is undeniable. Ever since his two fumbles against the Cowboys, he had been used sparingly, until this past Sunday against the Eagles when he scored a touchdown on the Giants first drive. Wilson ended up leaving the game with a neck injury, and did not return, he is out for Thursday's game against the Chicago Bears. If the Giants are going to put up a fight in the division race they need a healthy Wilson to provide the Giants with big plays in the running game, which has been non-existent so far this year.

The Giants defense has been the better of the two units so far this year, but that isn't saying much. They are still allowing 35 points per game, and while the turnovers from the offense has put them in bad positions, they still need to be much better. Big blue's defense has been hit hard by injury this season, especially in the secondary. The way you make up for the injuries in the secondary is with a pass rush, something the Giants used to be well known for, but have gotten none of this season. They have five sacks in five games this season, and a big reason for this is two time pro bowler Jason Pierre-Paul. He has one sack this season, and although he is coming off offseason back surgery, he hasn't been himself this season. If the Giants are going to go on a run they need Pierre-Paul, along with Justin Tuck to put pressure on opposing quarterbacks consistently, something we know they are capable of.

There have been some positives, believe it or not, for the Giants this season, namely the play of Victor Cruz, Prince Amukamara and Spencer Paysinger. Hakeem Nicks, had a very good week last week, and Will Hill came back from suspension and provided a spark to the defense. These guys all just need help from the other players on the roster who are certainly capable.

The Giants have played very poorly through five weeks, and that may continue in week six against the Bears, but don't be surprised if this proud team, with a potential future Hall of Fame coach, puts it all together and makes a run. It is a very unique thought I have, that the Giants still have a chance for the playoffs, but if they can cut down the turnovers, get a healthy David Wilson back, and put consistent pressure on the quarterback they have a chance. This is a lot to ask considering what we have seen so far from the G-men, but something tells me that the Giants still have some fight in them, and they will not allow themselves to be eliminated from the division race this early. Will the Giants win the NFC East? Probably not. Will they go 0-16? Also probably not, but I do believe that they will click sooner rather than later, and make things more interesting than most people are expecting.