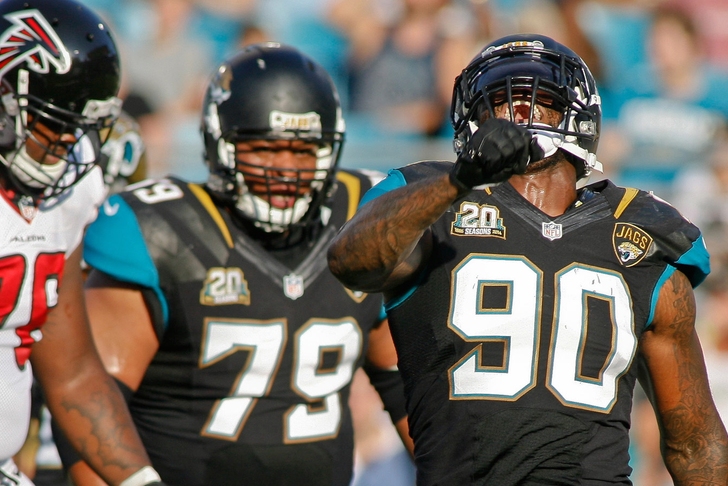 The Jacksonville Jaguars erased a 21-3 halftime lead for the New York Giants, scoring 19 unanswered points in the second half (and 22 overall) to take a 22-21 lead in front of their home faithful at EverBank Field.

New York would take a two-point lead back with a field goal, but Blake Bortles would drive the Jags down the field for a game-winning 43-yard kick by Josh Scobee with 32 seconds left. Jacksonville wins a thriller, 25-24.

Turning Point: A Jacksonville offense that was dead in the water at points on Sunday put together an impressive 11-play, 55-yard drive with just over three minutes left. They would cash in on the aforementioned Scobee field goal.

Eli Manning would subsequently fumble the ball away for the second time on the Giants' attempt at a desperation response drive, sealing the Jags' 2nd win in front of an appreciative home crowd.

That's how many points the Jaguars scored off of fumbles (one by Giants QB Eli Manning, one by Giants TE Larry Donnell) in the second half, as the defense singlehandedly brought Jacksonville back into the football game. With the Jags offense inconsistent with rookie Blake Bortles at the helm, the defense deserves a major pat on the back for turning a potential blowout around.

RB Rashad Jennings went into workhorse mode on Sunday, rushing the ball 26 times for 91 yards and two touchdowns. While the fumble bug hit other parts of the offense, Jennings stayed steady all day long.

LB JT Thomas had 12 tackles and a fumble recovery in the end zone for a touchdown. He spearheaded an extremely valiant effort by a Jacksonville defense that was on the field a lot on Sunday.

The Jaguars stay home to take on the Houston Texans next week, while the Giants head to Tennessee to face the Titans.