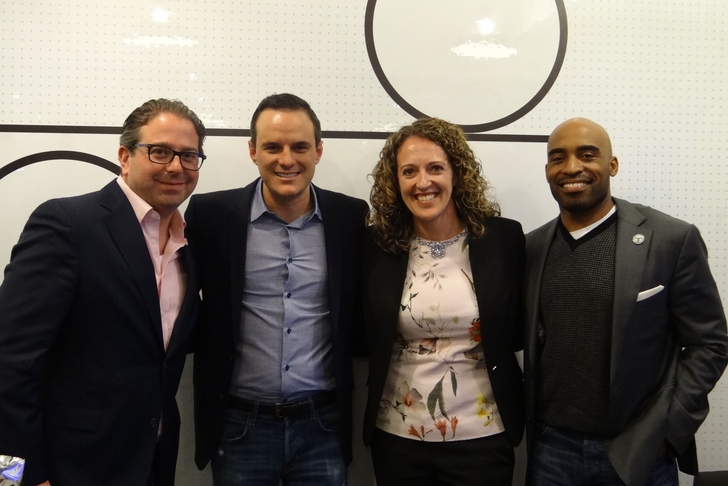 The storied past of the New York Giants backfield met its present and future at the Chat Sports Minds Behind The Game panel in NYC on Thursday, as current New York running back Andre Williams met former All-Pro Giants halfback Tiki Barber for the first time ever.

Tiki joined our panel to shed light on his work as co-founder of Thuzio, an online marketplace that facilitates bookings of professional athletes for dinners, celebrations, corporate outings, etc.

Williams was intrigued enough to introduce himself in impromptu fashion from his spot in the audience during the Q&A portion of the evening.

"Tiki, what's going on? I'm Andre Williams, current running back for the Giants," Williams said to a chorus of giggles. "It's great to be here.

"Your company Thuzio sounds a lot like what the NFLPA does for its players now. Do you guys go toe-to-toe?"

"No, no," Tiki said with a smile. "The beauty at Thuzio is that we're agnostic to who our 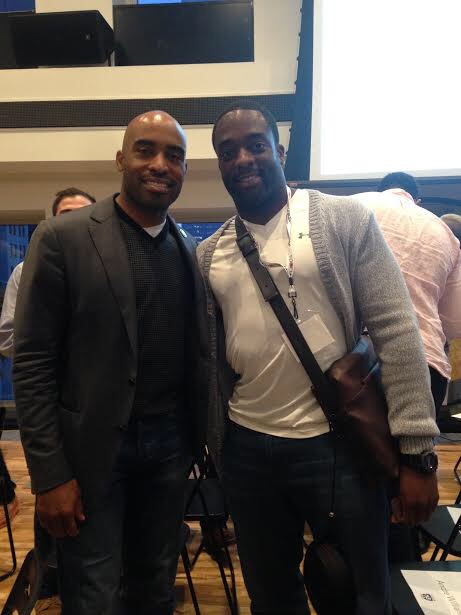 talent provider is. We have about 50 agency partners whose job is the same as our job, to expand opportunities for (athletes). The same thing can be said for the NFLPA...It's not a competition, but more of a complement to a lot of programs that are already in existence."

Williams, who appears to have the entrepreneurial spirit inside him as well, had a follow-up prepped and at the ready.

"As a professional athlete, you had advantages over non athletes in starting a company," Williams posited. "Can you (talk about) those advantages?"

"I lived in New York City my entire ten-year NFL career with the New York Giants," Tiki began. "I was one of the rare ones that did. The advantage of that was that I was walking in a rarefied air of business executives. Professionally did I belong? No, because they were growing companies and I'm just an athlete. But, I was in that crowd and it created that networking effect that I was able to take advantage of. So, the one thing I tell athletes is to meet as many people as you can because you never know."

For Williams, the chance to get some perspective from one of the legends who blazed the trail for him in New York, along with the likes of NBA executive vice president Amy Brooks and NY Red Bulls vice president Joseph Stetson, was a valuable opportunity:

Appreciate @chatsports for allowing me the opportunity listen to these guys talk! First time meeting… https://t.co/enbjCaSXIf

A cross-generational friendship seems to be in the works as well:

@TikiBarber@ChatSports@Thuzio Tiki it was an honor man! Looking forward to picking your brain about this game.

Visit this link to learn more about Thuzio and Barber's mission to provide new windows of opportunity to professional athletes.