5 Position Battles To Watch For The Giants In 2017 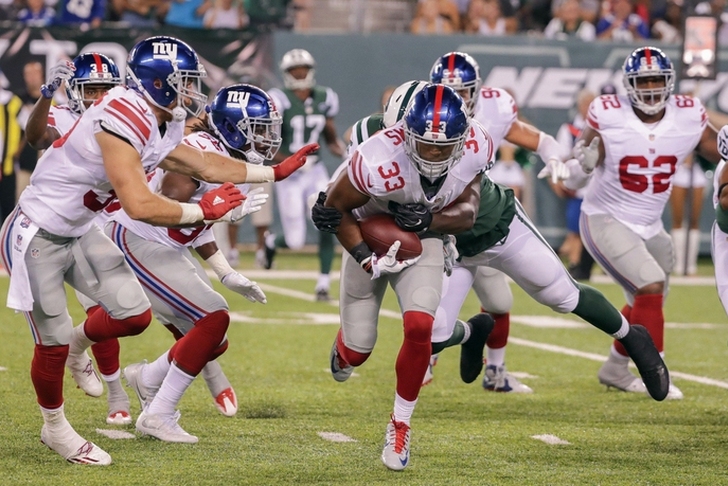 The New York Giants are fresh off an 11-5 season that resulted in a playoff berth, but that doesn't mean the depth chart is set entering the preseason. There are several key position battles, with the defense and offense still trying to figure out the starters. With training camp here for the Giants, it's time to take a look at the top position battles.

There are some notable battles (like backup WR and MLB) that aren't finalized yet but didn't make the cut. With that in mind, here are 5 Giants position battles to watch in the preseason.

Backup QB
Eli Manning is still the starter. But who steps up in his absence if he goes down with an injury? David Webb was a third round pick this year, but he's probably not ready to handle true backup duties. That leaves Josh Johnson, back with a new two-year deal after playing for New York last year and Geno Smith, last with the New York Jets. Smith didn't live up to expectations with the Jets, but he probably has more ability than Johnson. But it's Johnson who knows the scheme and isn't coming off an injury like Smith. Both players have limited guaranteed money, so it will be a true battle.

Defensive Tackle
Johnathan Hankins is now with the Indianapolis Colts, so he'll need to be replaced next to Damon Harrison. Dalvin Tomlinson is the long-term answer, as a second round pick pick from Alabama. But there's no guarantee he'll open the season as the starter. Jay Bromley has experience with the Giants, but not be anything more than a backup. Robert Thomas isn't a household name, but he drew praise for his work earlier this offseason. Corbin Bryant had a lot of game action with the Bills in previous years and was a late pickup this offseason. The player who finishes last in this battle might not make the roster.

Free Safety
This wasn't really supposed to be a position battle. The Giants took Darian Thompson in the third round last year, making him the free safety of the future. He backed up Nat Berhe to start the year, before Berhe went down with an injury. But then Thompson went down and up stepped undrafted rookie Andrew Adams. As a starter, Adams exceeded all expectations and now gets a shot to battle Thompson (and Berhe) for the starting gig. It's likely either Thompson or Adams, but the job won't be a lock Thompson like it was supposed to be when he was drafted.

Offensive Line
The Giants didn't make many additions upfront this offseason, but the most notable was D.J. Fluker. A former first round pick, the Chargers cut Fluker. Now he's in New York on a one-year deal, hoping to earn a starting spot on the right side. RG John Jerry and RT Bobby Hart are back, but Fluker could push one of those two out. The Giants have indicated they view him as a guard, but Jerry re-signed on a three-year deal this offseason. If Fluker gets a chance to move back to tackle after the Chargers kicked him inside, he might have a better shot at winning that job. Rookie sixth rounder Adam Bisnowaty could also push Hart, although that's an even greater long shot. Fluker might end up relegated to sixth OL duties.

Tight End
There are really two battles here: starting tight end and just making the roster. First round pick Evan Engram and free agent pickup Rhett Ellison are roster locks, but who will be the "starter." We'll see both get snaps, with Engram the more dynamic weapon. But his blocking might need work and that could relegate him to the No. 2 role to start. Will Tye is the returning starter, but he's clearly been knocked down the depth chart. Now, he has to hold off a challenge from Jerell Adams and Matt LaCosse.