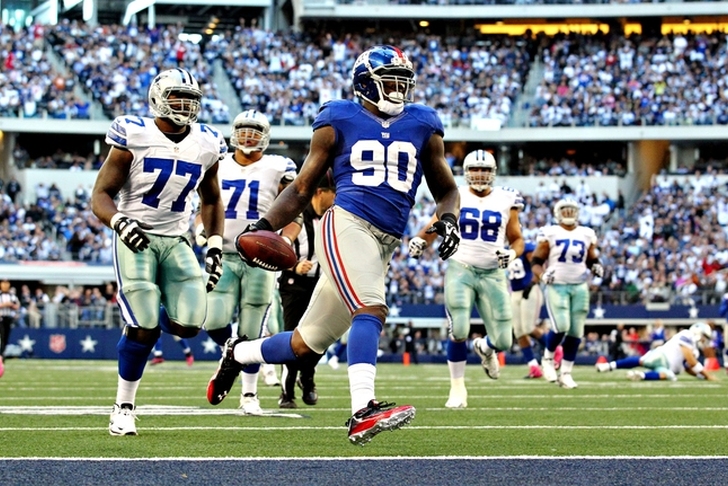 The New York Giants' uneven 2014 season is in the rear view mirror. Eli Manning and a rejuvenated Giants squad are ready to move forward and ride a high-powered offense back to the playoffs. It starts on Sunday Night Football, when the Giants visit their blood rivals, the Dallas Cowboys, in Arlington. With that in mind, here's 3 Things The NY Giants Must Do To Beat The Dallas Cowboys In Week One.

Romo is going to get his, but the object on Sunday is to take away his #1 target. Dez Bryant is way too big and has way too wide of a catch radius to be held down with simple man-to-man coverage. So, it's up to the Giants' defensive coaching staff to come up with creative double teams and force Romo to look elsewhere in the aerial game.

The Giants had a top-ten offense last season and Eli Manning was an elite-level quarterback more often than not. That's not the bill of goods that was sold by most national NFL analysts, but the fact remains that Manning hasn't lost as much of a step as most will lead you to believe. If they can get Eli in rhythm and chucking early and often, the Giants can hold their end of a shootout bargain.

Does anyone trust Darren McFadden's body not to break down? Is Joseph Randle really a legit #1 option? There are a litany of questions surrounding the Cowboys' rushing attack heading into this season and it's up to the New York front seven to keep those inquiries swirling at mach speed. If the Giants stuff the DeMarco Murray-less Cowboys on the ground, they'll be able to key in on the Cowboys passing attack in a much more effective fashion.