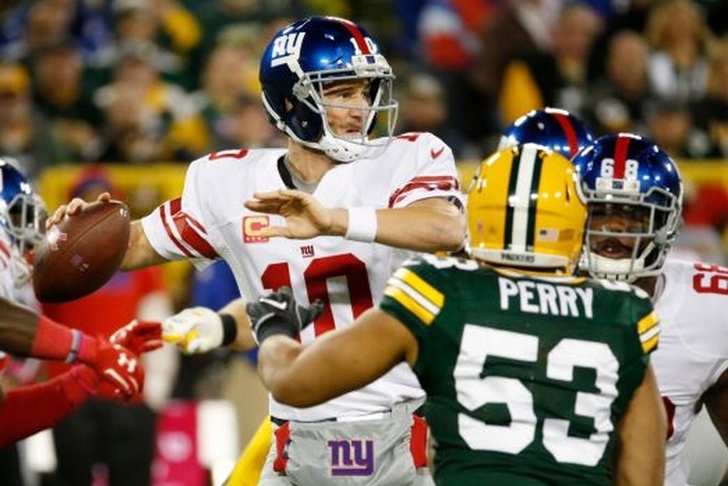 The New York Giants finished with the second-best record in the NFC this season, but are in the wild card after coming in second in the division. That has them traveling to Green Bay to take on the Packers this weekend, a game in which the Giants will win. Here are three of the biggest reasons why:

3) Green Bay's rash of injuries
Green Bay has been dealing with an abundance of injuries all year, and it's at it's worst before this playoff game. Over a quarter of their roster is officially listed on the injury report, with key players in cornerback Quinten Rollins (neck/concussion) and running back James Starks (concussion) not being able to practice. Wideout Randall Cobb (ankle), guard T.J. Lang (foot), linebacker Nick Perry (hand) and cornerback Damarious Randall (knee) were all also limited in practice, along with several other contributors.

The Packers will be trying to fight wounded on Sunday, while New York is much healthier. Advantage: Giants.

2) New York's improved defense
The Giants have proven to be a much better defense than everyone anticipated this season, ranking second in the NFL in points allowed (17.8 per game) and third in rushing yards allowed. They also have plenty of playmakers in the secondary and pass rushers that will make Aaron Rodgers' life difficult. Furthermore, New York is peaking at the right time, giving up 10 points or less in three of the last four games of the season.

1) Eli Manning's playoff history
Manning is 8-3 in his career in the postseason, including a 2-0 mark on the road over the Packers. He never really gets mentioned among the elite quarterback in the league during the regular season, but he steps his game up to another level in the playoffs. After Manning's first postseason game (in which he threw three interceptions), he has thrown for 2,403 yards, 17 touchdowns and five just interceptions in 10 games. Expect Eli to have another great game in this one.