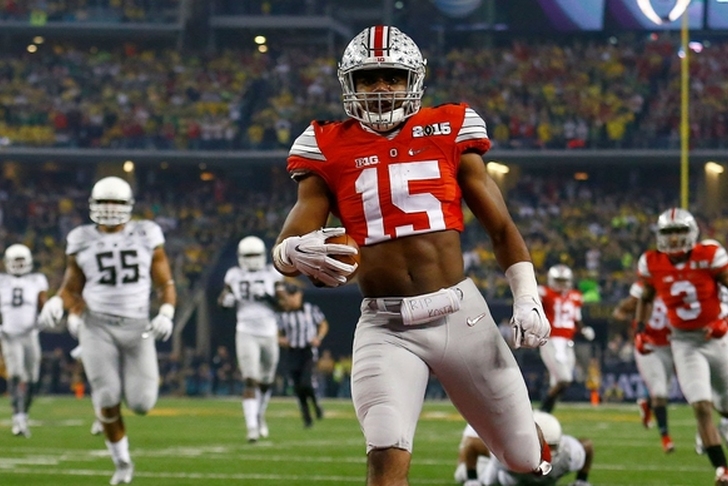 The New York Giants have plenty of options to choose from with the #10 overall pick in the 2016 NFL Draft, but there's just one position they should consider when it comes to using that top selection. Here's our list of 3 Players The NY Giants Should Target In The 1st Round Of The 2016 NFL Draft.

There's a chance Elliott won't last until the #10 overall pick, but the Giants shouldn't let him slip further. They've been using an ineffective running back by committee all season long. Elliott can be the workhorse back the team needs. While we're in an era where running backs are supposedly interchangeable, Elliott has a chance to be a generational talent with the right offensive line ahead of him. Check our more NY Giants NFL Draft news in our Chat Sports iPhone and Android apps.

The Giants need a pass rusher ASAP, and Buckner is the right talent at the right time for New York if they decide to go defensive end at #10. Buckners is an athletic beast who continues to grow by leaps and bounds as a pass rusher, and he's also an effective force sealing the edge on rushing plays and forcing opposing running backs towards the sideline. Unless the Giants decide to mortgage the farm, trading up for a potential franchise tackle in either Ole Miss' Laremy Tunsil or Notre Dame's Ronnie Stanley, Conklin is as good a reach as any at #10. He's built extremely sturdy from a core strength standpoint, and has the hands and instincts to blow open holes in the running game. Running back and pass rushing are the pressing needs, but a long-term tackle solution is right up there. Get up-to-date news on the NY Giants' NFL Draft plans in our Chat Sports Android and iPhone apps.