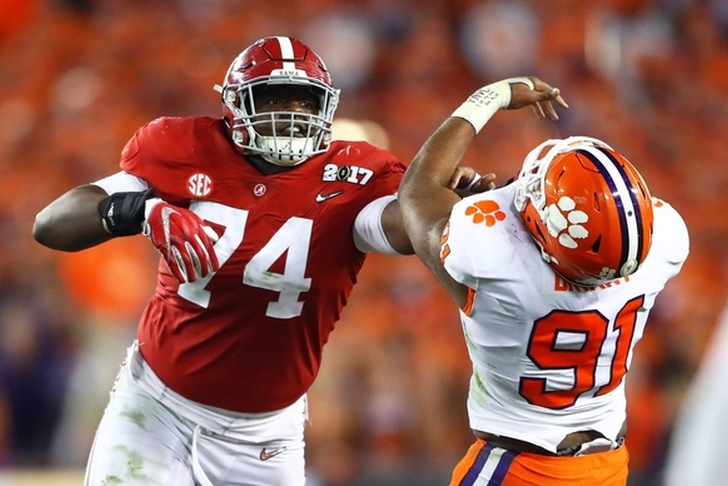 The NFL offseason is in full swing for the New York Giants. The team made several moves in free agency and are again in great position for a playoff push. But to get to the Super Bowl, the Giants have a few team needs to address. With the NFL draft less than a month away, it's time to take a look at the top three Giants team needs.

Although fans might want a new coach, general manager, owner or whatever, only positional needs are detailed here. Needs already addressed via free agency (like signing WR Brandon Marshall) are not included. With all that in mind, here are the 3 biggest Giants team needs for the 2017 NFL Draft.

3. Offensive Tackle
The Giants are going to give Ereck Flowers another year, but he needs to step up soon. He might be destined for a right tackle role. Either way, New York should add another tackle, because Chargers cast-off D.J. Fluker (who was moved to guard) is not an ideal starting option. The same is true of Bobby Hart. With the No. 22 overall pick, the Giants might be able to add one of the top three tackles in this year's class. The Giants tried hard last year to get a starting tackle, but missed out. Maybe they can correct that this year.

2. Defensive Tackle
This need is lessened if the Giants are able to re-sign Jonathan Hankins. I think they will, but right now, they're slated to start Jay Bromley next to Damon Harrison. That's not going to get the job done. If Hankins is brought back, depth is still something the Giants should add. The same is true of defensive end with Owa Odighizuwa's apparent retirement.

1. Linebacker
This has and will likely continue to be a need for the Giants. The team simply doesn't place much value on linebacker and it shows. They've had the chance to spend high picks on linebackers, but pass almost every time. The team has spent one third round or higher pick on the spot since 2007, despite it ranking high on the team needs list. The Giants lack an impact player, but they could elect to try to get by with the Devon Kennard, Keenan Robinson, B.J. Goodson and Jonathan Casillas grouping.

Follow our New York Giants team page for all the latest NY Giants News or download the Chat Sports App!