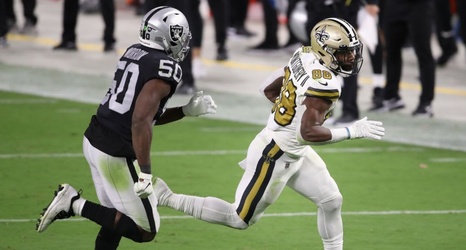 LAS VEGAS, NEVADA - SEPTEMBER 21: Running back Ty Montgomery #88 of the New Orleans Saints runs with the football after a reception against linebacker Nicholas Morrow #50 of the Las Vegas Raiders during the second half of the NFL game at Allegiant Stadium on September 21, 2020 in Las Vegas, Nevada. The Raiders defeated the Saints 34-24. (Photo by Christian Petersen/Getty Images)

With Alvin Kamara and all other Saints running backs on the COVID-19 list for Sunday’s matchup, here’s what the team was forced to do as a replacement.

The New Orleans Saints coaches and players are getting ready to play their last regular-season game against the Carolina Panthers on Sunday.