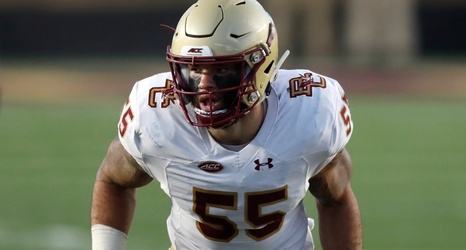 The Draft Network’s Justin Melo reports that a linebacker prospect has gotten on the New Orleans Saints’ radar: Isaiah McDuffie, out of Boston College. He’s been a standout on special teams throughout his college career, having started on the kicking units as a true freshman before earning starter’s minutes with the Eagles defense. He ultimately appeared in 31 games, missing most of his 2019 junior season with a knee injury before bouncing back to lead Boston College in tackles (107) as a senior.