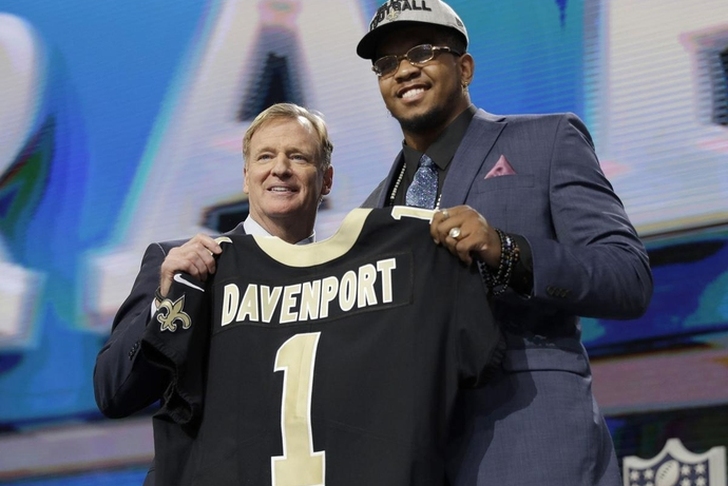 USA Today
Grade: D
Breakdown: "Sean Payton and GM Mickey Loomis had an epic draft in 2017, but this one seems fraught with peril. When they surrendered next year's first rounder to jump from 27th to 14th in the first round, it appeared like a calculated gamble for QB Lamar Jackson. But New Orleans actually paid that hefty price for DE Marcus Davenport, a tantalizing prospect but one who may not be ready to advance the all-or-nothing Super Bowl mandate this move clearly signals. Third-round WR Tre'quan Smith could offset the loss of Willie Snead but also looks no better than a No. 4 wideout option if Cam Meredith is healthy."

ESPN
Grade: C+
Breakdown: "The Saints had one of the best immediate-return draft classes of the past 10 years this past season. Marshon Lattimore. Ryan Ramczyk. Marcus Williams. Alvin Kamara. Alex Anzalone. I mean ... are you kidding? Add that much talent in one shot, then factor in a 39-year-old quarterback, and you figure you might be willing to take a risk or two.

"Well, I get it. They have a big need, and they're going for it. I also have to grade these in a vacuum, and by that measure this class is a big question mark. The Saints gave up a whopper of a package -- next year's first-round pick and a 2018 fifth-rounder -- to move up to take Marcus Davenport, a pass-rusher out of Texas-San Antonio. The kid's got upside, but that's serious value. This after they were already down a second-rounder in this draft due to a previous trade. Tre'Quan Smith (pick 91) was a decent value at a need position -- can Ted Ginn Jr. play forever? -- and Rick Leonard (127) is an interesting bet at tackle. Kamrin Moore (189) has the chance to stick in this secondary, though it's not nearly as thin back there as it was a couple of years ago.

"The Saints are a Super Bowl contender. It's clear they feel added pass-rush help could be a difference-maker in that pursuit. If Drew Brees gets another Lombardi, it'll all be worth it. If not, they gave up a lot."

Bleacher Report
Grade: C
Breakdown: "With all due respect to the rest of the New Orleans Saints draft class, the 2018 crop will be remembered for how well first-round defensive end Marcus Davenport performs. The Saints paid heavily to move up 13 spots for him, including their 2019 first-round pick and a 2018 fifth-rounder. Davenport tested incredibly well at the combine and will need to realize his potential within the next four years to pay off the investment the Saints made.

"Quarterback Drew Brees will love having Tre'Quan Smith as his newest receiver, though. Smith is a big, fast and vertically explosive player who can separate with ease on crossing routes. He'll quickly upgrade the receiver corps.

"Day 3 brought a mixed bag of backups and developmental fliers. The most notable was Boston College defensive back Kamrin Moore, who is a potential slot safety in the NFL, and the Saints have favored that role over the last two seasons.

"It would've been wise for the team to address its depth issues at defensive line and linebacker and find a capable backup quarterback."

SB Nation
Grade: C+
Breakdown: "The Saints gave up a first-round pick in next year’s draft to move up from No. 27 to 14 to get UTSA pass rusher Marcus Davenport. Beyond Cameron Jordan, the Saints don’t have much of a pass rush so this fills a need. However, this is a lot to give up for a raw player with a limited pass rush repertoire. This is a pick to make a Super Bowl push.

"Tre’Quan Smith is a big and athletic wide receiver who is good after the catch. However, his hands can be inconsistent. But this is the type of big swing a good team can make and hope it works out. If so, Smith will be able to put up big yards. It’s just a matter of how many targets he’ll even see with Michael Thomas, Cameron Meredith, Ted Ginn and Brandon Coleman on the roster.

"Fifth-round pick Natrell Jamerson is what the draft is all about. He played wide receiver, cornerback and safety at Wisconsin. In the NFL, his role as a special teams player. It was a specialty draft choice, but still a good one. He may not see a lot of snaps on defense, but he’s going to impact the game for the Saints."

Yahoo Sports
Grade: D-
Breakdown: "Marcus Davenport might be an exceptional pass rusher but you can’t ignore that the Saints gave up an extra first-round pick next year to take him. That’s a bad value proposition. The next pick was in the third round, and it was receiver Tre’quan Smith. There are better receivers in this class, but Smith lands in a fantastic offense. Offensive tackle Rick Leonard switched from defense to offense during his college career, so he should be a developmental pick. It’s hard to get past the overpayment for Davenport. He needs to make multiple Pro Bowls for that trade to make sense."

Sports Illustrated
Grade: B+
Breakdown: "New Orleans’s grade gets boosted a notch for the same reason New England’s did: instead of drafting a replacement for a still-dominant legendary QB, the franchise drafted players who can immediately help their Super Bowl-ready team. If Marcus Davenport, who provides a much-needed edge-rushing threat opposite All-Pro Cameron Jordan, pans out, New Orleans’s long-awaited defensive surge from 2017 will stick for years to come. The only downside is Davenport cost this year’s AND next year’s first-round pick, which is a huge haul.

"The rest of this draft provided depth, with third-round wideout Tre’Quan Smith presenting the option of letting wideout Brandon Coleman soon leave in free agency after this season. Smith, like Coleman (and like recently signed ex-Bear Cameron Meredith), is built for the seam balls and dig routes that define the Saints’ passing game."