Will Receiving Corp Without Colston Continue to Thrive in the Dome? 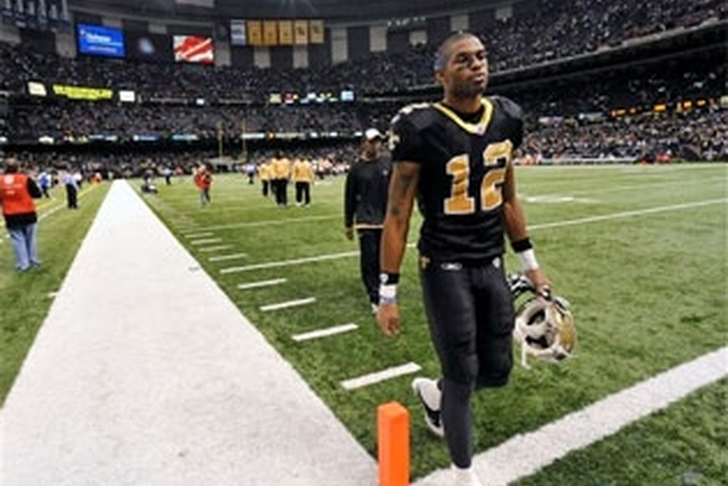 Can you feel it yet?  The feeling in New Orleans is one of antsy anticipation as the Dome prepares to open its doors to the “Who Dat Nation” on September 18th.  Finally, “The Big Easy” will be a Sunday haven once again, and the fans that cherish their team so dearly can sit back and relax knowing that their squad will be on its home turf.

The two opponents facing each other this coming Sunday had premier weeks that could be described as polar opposites.  In Chicago, the Bears steamrolled a dangerous Atlanta Falcons ball club, as quarterback Jay Cutler and running back Matt Forte combined to power through a questionable Falcons defense.  The Bears’ D, led by veteran linebacker Brian Urlacher, showed its ferocity on the playing field, as the Falcons’ QB, Matt Ryan, was unable to find a solid rhythm.

On the flip side, the Black and Gold travelled on the road to Lambeau Field, and we all know how that one ended up.  Following an aerial attack from both QBs Aaron Rodgers of Green Bay and Drew Brees of the Saints, the game was decided on a final offensive call that still has fans cringing.  A goal-line stand by the Packers kept the Saints from scoring the game-tying touchdown, leaving New Orleans wanting another chance to find victory.

Week Two is that chance.

With the 2009 Super Bowl Champions finally returning home, one thing is for certain:  things go a lot smoother in the Louisiana Superdome.  In 2010, the Saints recorded a 5-3 record at home.  Want to know the weirdest part, though?  Even though the Saints were an above .500 team when in the Dome, the stats would make you believe that they weren’t.

In fact, let’s take a glance at the numbers.

At home, Brees had an 89.9 passer rating, with him throwing 12 INTs while in the Superdome.  On the road, Brees was able to record a 91.8 passer rating, throwing only ten picks.  As funny as it sounds, the ground game was very similar.  In the Dome, the Saints’ RBs racked up 681 yards, averaged 3.6 yds/carry, and 85.1 yds/game.  How about on the road?  In opposing stadiums, the Black and Gold rushed for a total of 838 yards, averaged 4.4 yds/carry, and 104.8 yds/ game.  In fact, there is only one phase of the offense that seemed to thrive within the friendly confines of the Superdome:  the receiving game.

The receivers, led by veteran Marques Colston, totaled 2353 yards while at home, recording 17 TDs, 294.1 yds/game, and 1111 yards after the catch (YAC).  While away, the receivers totaled only 2283 yards, recording 16 TDs, 285.4 yds/game, and 948 YAC.  So while other areas of the offense seemed to have its share of struggles in “The Big Easy,” the receivers were busy averaging nearly 10 yds/game more than they had on the road.  Now, this sounds all fine and dandy until we remember one thing about Sunday’s matchup:  the Saints will be without its number one receiver.

With Colston injuring his shoulder on a beautiful diving catch made in the fourth quarter against the Packers, the Saints will have to adjust to life without their 6’4 target.  Let’s take a look at exactly what Colston would bring to the table.

In 2010, Colston loved the atmosphere inside of the Dome.  At home, he made 62 receptions for 469 yards and six TDs.  In New Orleans, he averaged 11.2 yds/rec, recorded 28 first downs and six catches of over 20 yards.  In other words, Brees loved looking to his top target in the Quarter.  Add on to the fact that he was a beast early last season (September/October), totaling 46 receptions for 527 yards, two TDs, 30 first downs, six receptions of 20+ yards, and 11.4 yds/game, and you have a man that will be missed in the Saints’ offense.

So without him, the Black and Gold will have to turn to their remaining three re

ceivers to move the ball.  At the moment, Lance Moore is considered “questionable” on the Saints’ injury report with a groin issue; however, both Devery Henderson and Robert Meachem should allow Brees to stretch the field.  In Week One, both Henderson and Meachem combined to score two TDs and total 170 yards against a solid Green Bay defense, and fellow teammates Darren Sproles, Jimmy Graham, and Pierre Thomas also helped to boost the receiving stats.

With that being said, the Chicago Bears’ defense knows a little about holding down opposing receivers.  Their two starting cornerbacks, Charles Tillman and Tim Jennings, combined for 12 tackles and two passes defended (both by Tillman), and both Julio Jones and Roddy White of Atlanta were kept out of the end zone.

All in all, the Bears will have their hands full with the Saints’ talented receiving corp.  Without Brees’ favorite target, though, one cannot help but question how it will affect the New Orleans offense.  It’s finally the weekend, though, so we’ll see soon enough.