Saints vs Falcons, Week 1: It Just Got Personal 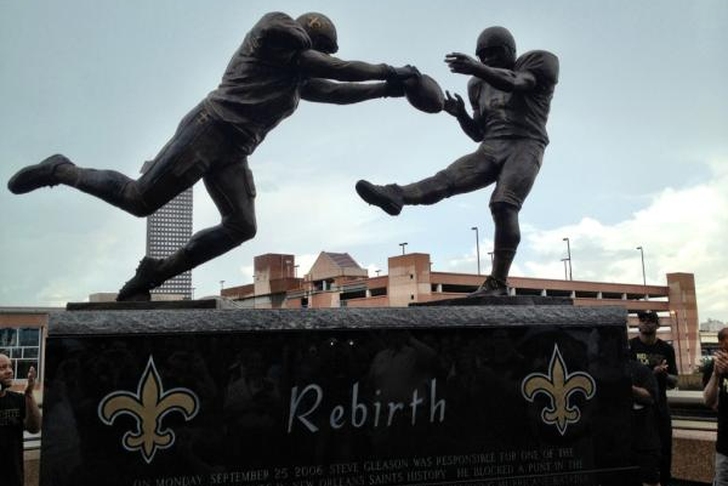 It’s pretty well known that when the Saints play the Atlanta Falcons, there’s a bit of extra personal weight that the matchup carries.  And after the events of this morning, their Week 1 matchup next season will take that to a whole other level.

First, a bit of background just in case anyone isn’t aware of what all went on: There was a player for the Saints named Steve Gleason.  Despite being a primarily-special-teams player, Gleason nonetheless was a fan favorite, and was a key player on perhaps the most famous and memorable play in Saints history: the blocked punt against the Falcons in the Saints’ first game back in the Superdome the year following Hurricane Katrina.

Later on, after his playing days had ended, Gleason was diagnosed with ALS, or Lou Gehrig’s Disease.  Initially given months to live, Gleason is still going years later, despite rapidly deteriorating physical condition.  You may have seen him at the NFL draft in April, where he announced the Saints’ third-round pick, despite not being able to walk or speak.  He has dedicated his life to not only fighting the disease, but putting all of his energy and resources into researching and developing ways to make life easier on other people with the disease.

Well, this morning some morning show DJs in Atlanta thought it made for some good material to have fun with.  I don’t want to write out what exactly was said when they had “Steve Gleason” as a guest on their show this morning; it frankly makes me too angry to think about.  It’s easy enough to find if you haven’t heard it yet.  But suffice it to say, it was disgusting.  There is joking and trash talking that comes with sports, that’s fine.  For all the talking and rapping and so forth at the Saints’ expense that came out of Atlanta during the Saints’ struggles this past season, I may not have liked it, I may have even found it downright idiotic at times, but it’s what you expect from a rival.  These guys went after a guy who hasn’t even played for the Saints in years, and is doing everything he can to fight a deadly disease even as that same disease slowly claims his body.

It bears mentioning to their credit that both the radio station (790 AM, which also happens to be the Falcons’ radio home), as well as the Atlanta Falcons organization itself have condemned the actions of these DJs, including the radio station suspending, and then terminating them all within the span of a few hours.

But remember this: to Sean Payton, Drew Brees, every Saint who’s played with Gleason, current players who didn’t play with him, but have gotten to know him over these last few years, not to mention Saints fans and the city of New Orleans itself, Steve Gleason is not just a former teammate or a former Saint.  He’s a beloved friend, and they’re not going to take this lightly.  The Atlanta Falcons may not have had anything to do with what happened this morning, but when they walk into the Superdome on September 8th, the Saints will be looking to take it out on them just the same.

This was always a rivalry.  Week 1, it’s personal.  Look out, Falcons.

For more information on Steve Gleason, ALS, or to find out what you can do, please visit http://www.teamgleason.org.