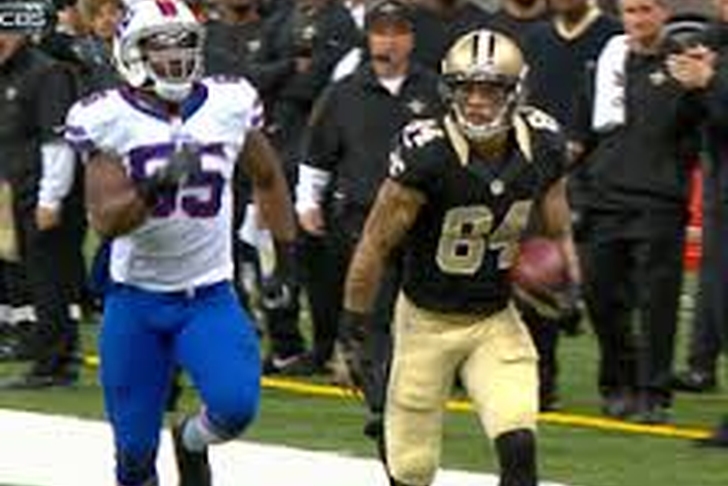 New Orleans Saints star tight end Jimmy Graham has been quarterback Drew Brees’ favorite target so far this 2013 NFL season, but recently, another Saints offensive player has emerged as a serious scoring threat. After sustaining a foot injury during New Orleans’ heartbreaking loss to New England two weeks ago, Graham returned to the field and scored two hard-fought touchdowns to contribute to the Saints’ 35-17 victory over the Buffalo Bills this Sunday. Nevertheless, with Graham at less than 100 percent, Brees often looked to throw the ball elsewhere, and rookie wide receiver Kenny Stills more than took advantage of the opportunities he was given.

Stills had three receptions for 129 yards and also added two touchdowns of his own against the Bills. As the fastest player on the Saints’ roster, he utilized his incredible speed to outpace Bills linebacker Jerry Hughes and ran untouched into the end zone for his first score of the day. Stills hardly stopped accelerating as he leapt into the stands of the Superdome to celebrate with a crowd of elated Saints fans. His second touchdown came off of a 42-yard pass from Brees in the fourth quarter and crushed the Bills’ hope of a comeback.

The Saints selected Stills, who played wide receiver for Oklahoma, in the fifth round of the NFL draft this year, and based on his performance against the Bills, the rookie looks like he could become yet another late-round hidden gem for the Saints. Indeed, the Saints’ offensive roster has featured several breakout players in recent years, including current starting wide receiver Marques Colston, who was the Saints’ seventh-round pick in the 2006 draft. With Stills similarly making both Saints fans and opposing defenses take notice of his number, perhaps Graham no longer has to be Brees’ go-to scoring option.