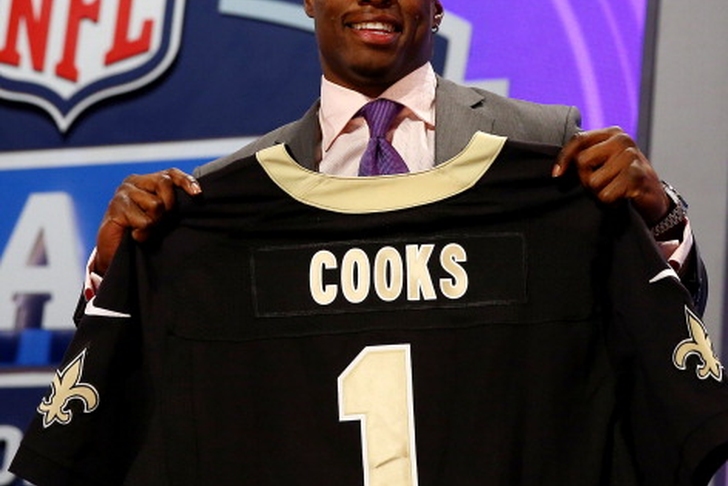 Going into the 2014 NFL Draft, the New Orleans Saints had a few questions to consider. What steps could they take to re-fortify their suddenly-kind of-thin wide receiver corps? How could they make their much-improved defense even better? After some departures and disappointing play on the offensive line, could they strengthen that unit to keep Drew Brees more comfortable and protected in the pocket?

With the draft now complete, the only question fans are concerned with is “How well did they answer those questions?” So how did the Saints do?

First, let’s take a look at who the team came away with.

Want to know how much of a sure thing Mickey Loomis and Sean Payton think Cooks is? They didn’t even meet with him before the draft, but still traded up seven spots (giving up

their third-round pick in the process) to get him.

Cooks had an outstanding 2013 season for the Beavers, leading the FBS with 1,730 receiving yards to go with 16 receiving touchdowns on the way to winning the Biletnikoff Award. While a bit on the small side (5’9”, 189 lbs.), Cooks makes up for it with his speed, running a 4.33 40-yard dash at the combine, fastest among receivers and second-fastest overall. He could make a great addition as a slot receiver if the Saints decide to keep Marques Colston and Kenny Stills on the ends. It also doesn’t hurt that he’s been consistently named as one of the best character guys in the draft.

A former wide receiver, Jean-Baptiste is still learning the position of cornerback, but has all of the athletic tools to be great. He brings good size (6’3”, 218 lbs.), solid speed (4.61 40-yard dash), and excellent leaping ability (10’8” broad jump to go along with a 41.5” vertical leap, best among DBs at the combine). In 2013, his only season as a full-time starter, he recorded 41 tackles to go along with 12 pass defenses and four interceptions.  Could take some time to develop, but the sky is the limit. SJB may see some early action as a nickel or backup defensive back before competing for a starting job. On the down side, if he wants people to pronounce his last name correctly (Gene-BAPteest), New Orleans was probably the worst place he could end up, because everyone will pronounce it the exact opposite of that.

The Saints used their fourth-round pick to fill what might be their biggest defensive need, adding Fortt to their linebacker corps. He’s got good size (6’2”, 248 lbs.) and strength (bench pressed 225 lbs. 30 times at the combine, tied for the most among linebackers), and enough speed and agility to move around the field well. The biggest issue with Fortt may be durability, as he’s had injury issues since high school, including missing all of the 2012 season after knee surgery, and his 2013 season ending after nine games due to a biceps injury. He also sprained a hamstring during the combine. Still, Fortt is a formidable athlete that could be a contributor both on defense and special teams as long as he stays healthy.

The son of a coach (his father Sal is the defensive line coach at Florida State), Sunseri brings the potential for leadership as he is brought along in the pros. He’s not the best athlete, but he has good field smarts and reactions. In 2013, he logged 20 tackles and two interceptions—both of which he returned for touchdowns—before his season was ended on the opening kickoff of the Crimson Tide’s seventh game by a torn ACL.

Sunseri likely won’t see the field much at safety any time soon, but could be a contributor on special teams and could develop into a locker room leader.

Someone who years ago would’ve been projected to go much higher in the draft (he was widely considered the top defensive end recruit in the country coming out of high school), injuries and struggles with the mental side of the game have brought Powell’s stock down. Much like Fortt, he’s struggled to stay healthy, missing all of 2012 with a torn ACL and sitting out all or part of several more games with minor ailments in his three years of action. The size, speed and athletic ability are still there, but he must improve his instincts, reactions and mentality if he wants to succeed in the NFL.  Overall, a good upside pick at a relatively low cost.

The Saints hope to add some depth on the offensive line following the departures of Charles Brown and Brian De La Puente in Rooks, a big tackle who played two seasons for the Wildcats, earning Honorable Mention All-Big 12 honors each of those two years. Before that, he played at Navarro Junior College where he won a junior college national championship. Rooks will compete for a roster spot, and it could work in his favor that the line wasn’t that good last year and lost two starters in the offseason. He won’t open the season as a starter, but could definitely make the team.

So How Did They Do?

The Saints went in with some definite objectives in mind, and made quick work of addressing them, grabbing a wide receiver, four defensive players and an offensive lineman.

Some fans have disagreed with trading up (and giving up their third-rounder) for Cooks when other good WR prospects would have still been available at 27, chief among them USC’s Marqise Lee, who fell into the second round. But the speed and athleticism that he brings to the table make him a great fit for the Saints’ offense, and he could be an immediate impact player. With a relatively light crop of quarterbacks and running backs in this year’s draft, it’s not unthinkable that he could be in the running for Offensive Rookie of the Year.

Jean-Baptiste could end up being a steal as a late second-rounder. As mentioned, he only has one year of being a full-time starter at cornerback under his belt, and he made enough of an impact to be drafted this high. As he continues to learn the position (and the Saints bringing in Champ Bailey gives him a great mentor to learn from), he could truly turn into something special.

Considering that linebacker was probably the biggest need for the Saints on defense, they certainly rolled the dice with the two linebackers they selected.

Both Khairi Fortt and Ronald Powell could be real contributors on a linebacker corps that needs impact players. However, they need to be able to stay on the field, and Fortt and Powell’s injury histories aren’t encouraging. Powell also needs to better his football mentality and improve his play recognition, reactions and instincts. If one of these guys can live up to his potential, it could be called a success. If both do, that would be great. But it’s just as likely that one (or both) could struggle to stay healthy and find themselves in and out of the active roster.

Are they sleepers?  Will they be busts?  Either or both of these two could really go either way.

The Saints got players at the positions they were aiming to fill, and didn’t waste time taking guys at positions they didn’t need.  There are question marks to be sure, but those are mostly in the middle-to-late rounds when sure things are rare, if not impossible to come by.

It would have been nice to see them devote earlier attention to linebacker, as the need for those is probably greater than the need for a cornerback, but the potential on Jean-Baptiste was too much to pass up (and indeed, Sean Payton has said that if he hadn’t been there when they picked they would’ve likely traded out of the second round altogether).

Two potential immediate impact players, a couple of question marks with a lot of potential, a guy who could be a locker room leader and someone who could give you depth at offensive tackle?  Not a bad haul.