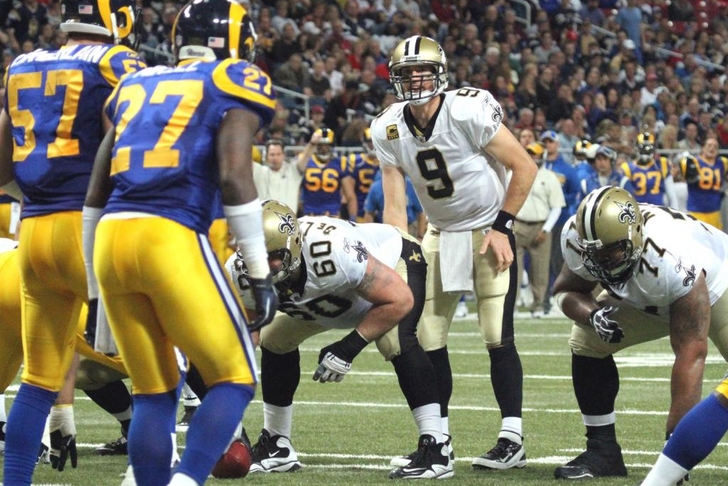 Fresh off their worst loss in six years at Seattle, the New Orleans Saints bounced back strong to post their most impressive victory of the year at home against Carolina.  Sunday’s win has the Saints firmly in the driver’s seat in the division race, which will most likely see the winner get the second seed in the NFC.  There’s still a rematch in Carolina to play, but if the Saints can take care of business in their other two final games, it won’t matter.

Up first are the St. Louis Rams, a team that’s been the personification of hot-and-cold.  Currently at 5-8 (and eliminated from the playoff race), the Rams have outscored their

Will this weekend be one of them?  If so, which team will it favor?  Let’s go to three factors to consider heading into Sunday…

Recent history isn’t that great. In the last decade, the Saints have made a reputation as one of the NFL’s better franchises.  The Rams?  Not so much.  That all being said, the Rams have actually proven to be something of a thorn in the Saints’ side lately.  In the Payton/Brees era, the two teams have met four times, with each side winning twice.  Interesting to note, both of the Rams’ victories in that time (in 2007 and 2011) saw them coming into the game winless and the Saints at .500 or better, only for St. Louis to pick up its first victory.

Furthermore, Drew Brees has had troubles with the Rams, averaging 248.8 yards per game with eight touchdowns and eight interceptions in his four meetings with them as a Saint, while failing to post a 300-yard game in any of the contests.  These wouldn’t be bad numbers for a lot of quarterbacks, but Brees has played at such a high level over his tenure in New Orleans that it’s surprising to see him look average against a team that hasn’t had a lot of success in recent memory.

Backup QB woes. Sam Bradford finally seemed to be figuring it out.  In his fifth season, the quarterback who had been pretty inconsistent through his NFL career was finally starting to develop into an upper-tier passer, posting a 60.7 percent completion percentage to go with 1,687 yards, 14 touchdowns and only four interceptions through seven starts.  Then a torn ACL ended his year, thrusting backup Kellen Clemens into the starting role.  The drop in production has been significant, with Clemens (through six starts) only completing 52.7 percent of his passes for 1,200 yards with five touchdowns and 5 interceptions.

But if any Saints are thinking of taking Clemens lightly, all one needs to do is remind them of 2011, when backup A.J. Feeley, subbing for an injured Bradford (noticing a pattern here?) led the then-0-6 Rams to a 31-21 upset of then-5-2 New Orleans in St. Louis.

Look out for Tavon Austin. Austin, a rookie WR drafted seventh overall this year, has taken his lumps and struggled at times to find his groove in the league.  However, he has come on lately, with four touchdowns in his last four games, all from more than 50 yards out.

In addition to his speed being an asset as a receiver and return man, he has proven a formidable ground threat.  Austin has had one carry in each of the Rams’ last three games; they have gone for 65, 10, and 56 yards.  On the season he has 9 total attempts for 151 yards (16.8 ypc).  Austin is currently being called questionable for Sunday, but if he plays, he’ll be handed the ball at some point, and the Saints have to be ready for it.

Coming off their best win of the season, the Saints cannot afford to get complacent.  As big as beating Carolina was, they still have to play the Panthers again, this time on the road.  If New Orleans can win the two games remaining on their schedule that they really should win (this weekend against St. Louis, and at home against Tampa Bay in two weeks), that game in Carolina will be irrelevant to their pursuit of the NFC South title and (in all likelihood) the second seed and first round bye in the NFC playoffs.  They can’t relax just yet, and they won’t.  31-10 Saints.