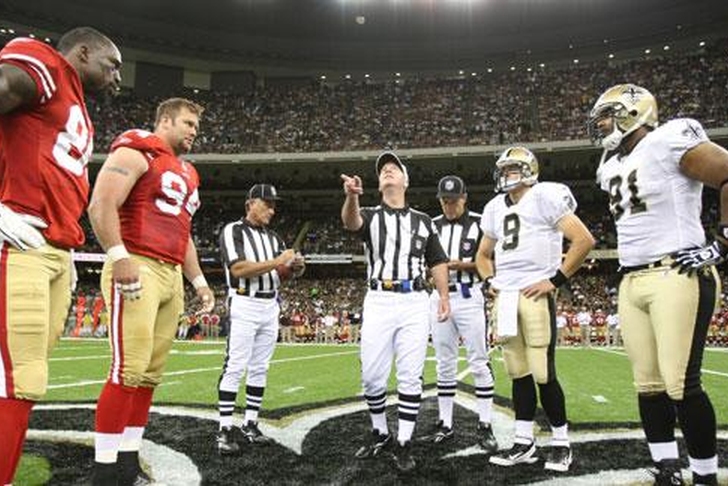 It took two months and five tries, but the Saints finally got their first road victory of the season. The win moved them into first place in the NFC South, and many NFL experts seem ready to just hand the division over to New Orleans. It’s way too early for that, but if they can keep up the play that they’ve displayed the last two weeks and avoid slipping back into the type of play we saw the first month of the season, they are definitely the favorites to win the South.

So now that they have the lead, how do they make sure they can maintain it? Well, having the next three games at home helps. The three-game stretch includes the Bengals, who just got whacked 24-3 at home by Cleveland Thursday night, and the Ravens on a Monday night, where there’s always some magic in the Superdome. The toughest opponent of the three comes in this weekend in the San Francisco 49ers.

Much like the Saints, the 49ers came into the season as a popular pick for a Super Bowl contender, and much like the Saints, their first half has left them a disappointing 4-4, including a 13-10 home loss to St. Louis last weekend. Still, the talent on this San Francisco team is well known, and the Saints cannot afford to take them lightly.

The key to this game could very well boil down to how quickly the Saints can get to the quarterback. Colin Kaepernick represents another dual threat QB, much like Cam Newton 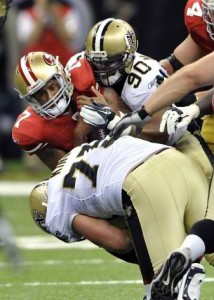 did last week. Just like Newton, the key to stopping the Niners offense is to keep pressure on him. San Francsico’s offensive line has been, well, offensive lately, giving up sacks on 8.6 percent of dropbacks this season, including eight sacks to St. Louis last week and six to Denver the week before that.

If the Saints can use this home stand as a chance to put some space between themselves and the rest of the division, then late-season road games against Pittsburgh and Chicago won’t look nearly as daunting, and even a first-round bye could potentially still be in play. But for now, all they can focus on is San Francisco.

Mark Ingram: 100+ yards rushing: It took 16 yards on the final garbage time drive in the fourth quarter, but Ingram hit 100 yards exactly, and threw in a pair of touchdowns for good measure. Full Credit.

Cam Newton held to less than 50 yards rushing: The Saints kept Newton in check, holding him to 43 yards on seven carries. Full Credit.

Drew Brees throws 3+ touchdowns: Nah. Brees threw for one (and ran for another), but the running game was consistent enough that three of their four scores came on the ground. No Credit.

3+ sacks for the defense. Going back to the well one more time. Like I wrote above, the line is finally looking like what we expected them to look like, and San Francisco’s offensive line just isn’t very good, giving up a bunch of sacks lately.

Jimmy Graham goes for 60+ yards and a touchdown. The 49ers have actually been pretty solid against tight ends lately, giving up only 47 yards per game to the position in their last four games. However, three of those four games came against St. Louis and 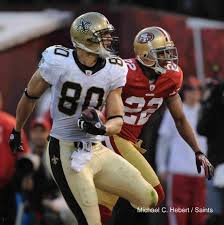 Kansas City, neither of whom have a tight end the caliber of Graham. Not to mention that when the Saints get close to the end zone, you know exactly where Drew Brees is looking. Speaking of Drew…

Drew Brees throws 3+ touchdowns. San Francisco has been pretty good against the run, so it’s unlikely Mark Ingram will go off quite like he has lately. Most of the action will be through the air for New Orleans, and Brees will take advantage.

Another game that I had penciled in as a loss at the beginning of the season, another game that I’m questioning that decision. Between the Saints finally starting to hit their stride and the Niners not looking nearly as impressive as they were expected to, this feels like a strong win possibility. If the last couple of weeks haven’t been a mirage, the Saints should be able to pull this one off at home. Saints win, 27-19