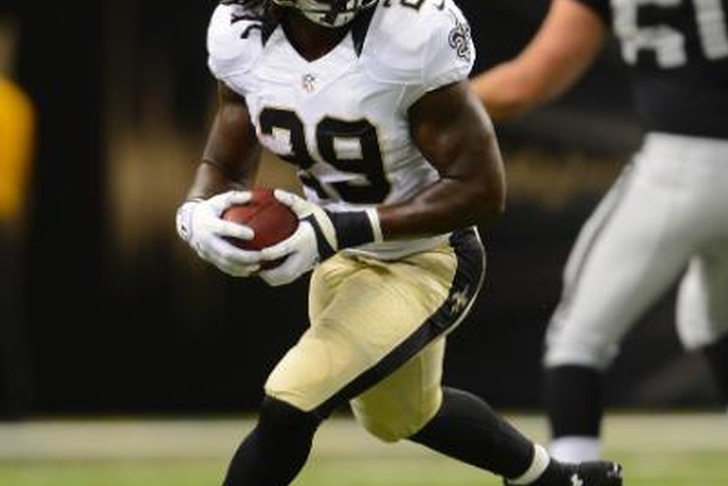 It’s been a long two weeks, but it’s finally time to get back to it.  The Saints, coming off their first loss of the season two weeks ago in New England, return home to take on the Buffalo Bills.  In spite of the disappointing loss, New Orleans sits at 5-1 (one game better than I had them at this point in the season), and are in control of the NFC South.

Obviously the improved defense has been a big part of that, but I’ve written enough about them for a while.  This week I’d like to spotlight another new face who’s already begun to make a difference, and will continue to do so going forward: running back Khiry Robinson.

An undrafted rookie out of Texas A&M…er, wait, excuse me, West Texas A&M, Robinson caught fans’ eyes in the preseason with his hard running that put Mark Ingram to shame.  It was enough to win a spot on the 53-man roster, and while he didn’t see the field for the first few weeks of the season, Ingram’s toe injury provided an opportunity, and Robinson has answered.  He’s continued to show the drive that we saw in the preseason, and to be quite honest, may have rendered Ingram expendable.

So congratulations to Mr. Robinson and his big entry into the New Orleans Saints scene.  On to Buffalo!  Here are a few things to consider heading into Sunday:

Injuries all over the place. Buffalo will be still without quarterback EJ Manuel, who was looking promising before going out of action.  Backup Thad Lewis has done an admirable job in his place, but at the end of the day he’s still Thad Lewis.  The Bills may also be without CJ Spiller, who didn’t practice Thursday.  Missing both their starting quarterback and most dynamic offensive weapon hurts the Bills, but remember that they still have Fred Jackson and Stevie Johnson, plenty capable of doing some damage in their own right.

On the Saints side of the ball, they too may be without their primary offensive weapon in Jimmy Graham, who still hadn’t practiced either as of Thursday, and it’s looking less and less likely that he’ll play Sunday.  The Saints, however, are in a bit better of a position to cope with such a loss, given the array of receivers and running backs Drew Brees has around him.  Not to mention backup tight end Ben Watson, no slouch himself.

Buffalo does have a pretty decent defense, though. Currently leading the NFL in interceptions, and tied for fourth in sacks, the Bills have put together one of the more quietly dangerous units in the league.  On the flipside, however, they’re giving up 25.4 points per game, which ranks them 22nd.  This is a D that’s beatable, but can hurt you if you give them the opportunity.  If Drew Brees plays his normal steady-handed game and the offensive line can give him protection, he should be able to produce nicely.  If mistake-prone Brees shows up, he could be in a lot of trouble.

Keeping pace in the division. Lost in all the stories about Atlanta’s collapse and Greg Schiano’s hilariously disastrous year in Tampa is that Carolina has made a quick turnaround to threaten the Saints’ division lead.  With their win over the Bucs Thursday night, the Panthers have now won four of their last five and sit only a game and a half behind the Saints in the NFC South standings.  A win for New Orleans would be big, as it would preserve a multi-game lead, whereas a loss would leave only a single game between them.

Either way, it’s looking like the end of the season (when New Orleans and Carolina play each other twice in three weeks) could be very interesting.

Saints running backs score at least two touchdowns. As noted, the Bills’ pass rush and secondary have been performing well when it comes to making plays against opponents’ passing games.  However, they’ve been less successful against the run, ranking 28th in the NFL giving up 123 yards per game.  Look for the Saints to use their running backs regularly, whether on handoffs or short passes, and find success that way.

this week.  The Bills will likely be without a couple of key players on offense, and the defense will look to rebound in a big way from the disappointment of two weeks ago.  As a bonus, I’ll call that at least one of the sacks goes to Junior Galette.

Someone besides Thad Lewis throws a pass for Buffalo. Just a pure hunch here, but at some point someone besides Buffalo’s starting QB will throw a pass.  Whether it’s backup Jeff Tuel, the newly signed Matt Flynn, or even a running back or someone on a trick play, someone else will throw the ball.

It’s been a long two weeks to sit with the feeling from that New England game in my gut, and I’m sure the players feel the same way.  Come Sunday, they’ll be ready to get back out there and get back to business.  Keeping the Panthers at arm’s length provides additional motivation, but more than anything they’ll be looking to re-assert themselves as a force to be reckoned with.  A banged-up Buffalo squad is the perfect recipe.  Saints win, 35-13.