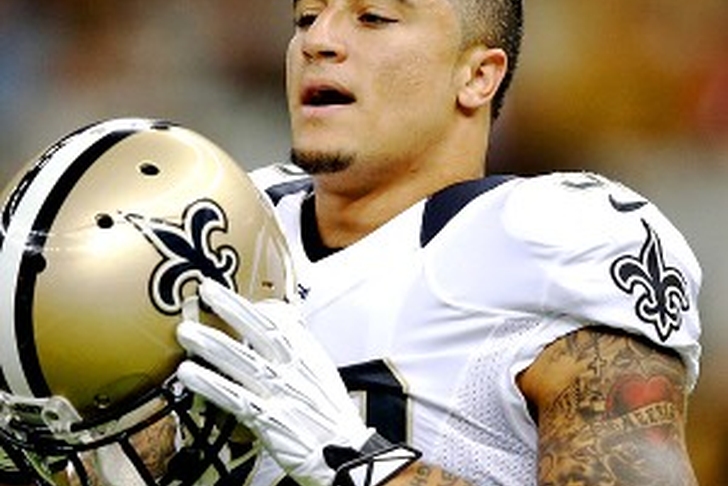 I’ve said this before, but what a difference a year makes.

This time last year, the New Orleans Saints were 0-4, their season seemingly over a month in.  Yeah, they stuck around long enough to give their fans hope, but point is they were in a colossal hole.  This year, it’s just the opposite.  The Saints are 4-0, and if that isn’t good enough, they already have a three-game lead in the NFC South, thanks to Atlanta’s drop-off, Carolina’s continued mediocrity and Tampa’s laughable awfulness.

It’s been a fun few weeks thus far.  At no point have the Saints played a game that I went in just hoping to win; I went in expecting to win all of them.  This made the last two weeks

particularly sweet, as fans went in confident, and watched the Saints make quick work of Arizona and Miami.  It’s been nice to feel so sure about things, and then have that confidence rewarded.

That said, this weekend doesn’t inspire the same level of confidence that I’ve felt so far.  The game is not unwinnable by any means, but here are a few factors that Saints fans should be concerned with heading into Sunday.

The Offense. The Saints’ defense has been much improved, but this will be their biggest test.  Yes, they played the Falcons, but Roddy White was injured and Steven Jackson isn’t nearly what he once was.  The Bears have perhaps a top-five receiver in Brandon Marshall, another young receiver coming into his own in Alshon Jeffery, and dual-threat Matt Forte who can hurt teams both with his running and catching.  Not to mention Jay Cutler, who’s shown himself to be a capable, if not always consistent, quarterback.  Combine all of this with a much-improved Bears offensive line, and, this will be a challenge for the young defense.

The Environment. Not just the weather, either.  Soldier Field has not been kind to the New Orleans lately, as the Saints are 0-3 at Chicago in the Brees-Payton era, including the 2006 NFC Championship game.  The one thing that might make the elements a bit less daunting this time around is that those other three games were all played later in the season, when the weather was much colder.  Having said all that, Chicago is still predicted to be around 50 degrees on Sunday with a 30% chance of rain.

The Intelligence. One factor that may be overlooked is some of the personnel moves in the offseason.  In particular, two men who went from New Orleans to Chicago.  Jermon Bushrod, the Pro Bowl left tackle, left the Saints in free agency to join the Bears, as well as Aaron Kromer, the Saints’ offensive line coach (and interim interim head coach until Joe Vitt’s suspension came to an end), who took the job as Marc Trestman’s offensive coordinator.  These are two men who know the Saints’ offense well, and who no doubt are at work educating their team.  Obviously, Sean Payton and the Saints have likely changed their counts and audibles and such in the offseason, but that doesn’t mean that Bushrod and Kromer don’t know Drew Brees well and have knowledge of what he likes to do.

-          The Saints break their season high in team rushing (104). Maybe not the wildest of predictions, but have you watched this team try to run?  New Orleans is currently ranked 25th in the league with 81.3 yards per game (though 2nd in passing, 338.3), but the weather will force them to keep the ball on the ground a bit more often and they’ll pile up some rushing yards, if for no other reason than the number of attempts.  It also won’t hurt that Chicago’s giving up over 100 yards per game on the ground.

-          A wide receiver besides Marques Colston catches a touchdown. Charles Tillman may or may not play, but even if he doesn’t, the Bears still have Tim Jennings.  Colston will be tightly covered all day, which will force Drew Brees to find other options.  Jimmy Graham is obviously the most likely target, but I think Brees finds one of his less-heralded receivers (Meachem, Stills, Toon) for a score.

expected, has become a fan favorite in New Orleans, and I think the defensive line will be able to get pressure on Cutler that will force him into floating up a few rushed throws, and Vaccaro will pounce on the opportunity.

The ride’s been so good so far, I don’t want it to end.  But in my pre-season predictions, I had the Saints at 4-0 here suffering their first setback, and in the pit of my stomach I still can’t shake that feeling.  If the weather stays relatively calm they have a good chance, but these Bears are still the most complete team they’ll have played to date.  If the rain kicks in and weakens/neutralizes the passing game, the advantage swings decisively to Chicago and their much-better rushing attack.