New Orleans Leads Atlanta 20-10 At The Half 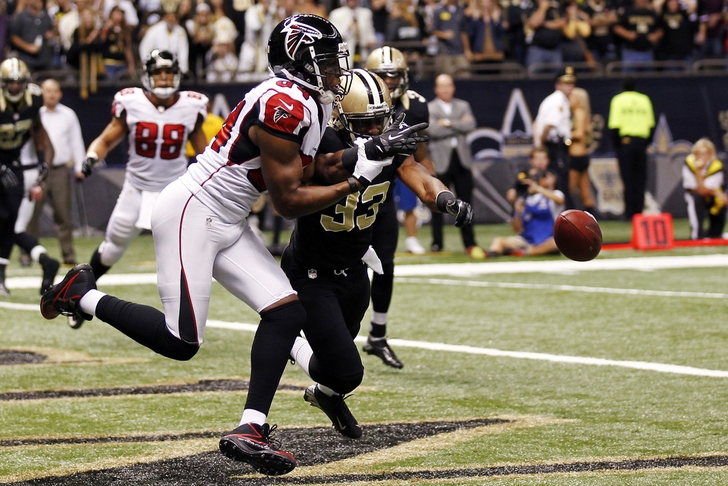 The New Orleans Saints took on the Atlanta Falcons in a NFC South rivalry matchup, and the Saints quickly set the tone.

While New Orleans didn't find the end zone in the first quarter, they led 6-0 at the end of one thanks to two Shayne Graham field goals. The Falcons' first series ended with a three-and-out, and while QB Matt Ryan led a nice drive on their next possession, his hard work was undone after Julio Jones had the ball forced out by newly-signed Saint Jairus Byrd.

Saints RB Khiry Robinson scored on a short run early in the second quarter to put New Orleans up 13-0 after a 9-play, 80-yard drive, but the Falcons finally settled down and found an answer.

Matt Ryan embarked on an 14-play, 80-yard drive that featured Ryan doing everything short of catching his own passes. His eventual touchdown pass to Roddy White cut into the Saints' lead, but New Orleans found an immediate response.

Drew Brees drove right back into the red zone with short passes out of the shotgun, and with under 30 second left in the half, he found rookie WR Brandin Cooks for a touchdown that put New Orleans up 20-7.

Matt Ryan took over with just 20 seconds remaining on the clock, but two long passes - one to Devin Hester and one to Roddy White - the Falcons managed to get into field goal range. Matt Bryant made no mistake from 40 yards as the clock expired, and the Falcons went into halftime trailing 20-10.