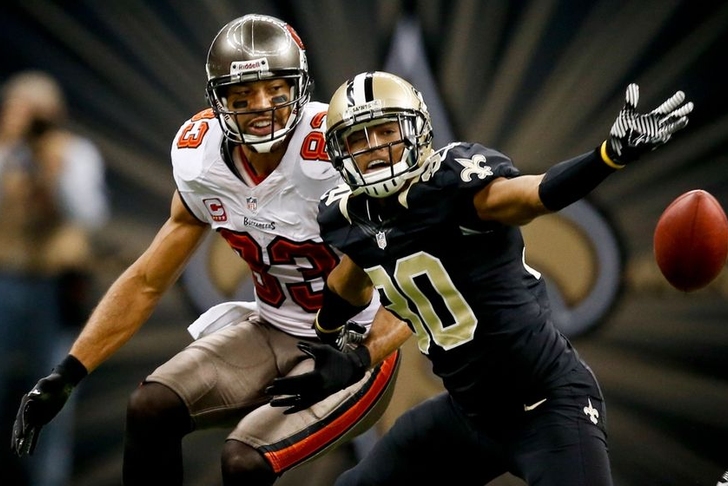 Jimmy Graham did not return from the locker room after suffering a shoulder injury in the first half, leaving the Saints short on offense.

The Buccaneers kept things rolling coming out of the locker room, taking the lead on a Bobby Rainey touchdown run, giving them 17 unanswered points.

Things got even worse for the Saints, as Drew Brees threw his second interception of the game - this time returned 33 yards for a Tampa Bay touchdown, putting the deficit at 24-13 midway through the third.

Glennon continued his resurgent second half though, hooking up with receiver Robert Herron for another score that put Tampa back on top by 11 at 31-20.

The Saints offense did everything it could to try and come back, as Pierre Thomas found the endzone on a 23 yard run. A failed two point conversion was made up for by a safety minutes later, as the defense sacked Glennon in his own endzone on a 3rd and 29 attempt.

A Shayne Graham field goal sent the game into overtime, where a Khiry Robinson touchdown run gave the Saints the win.

Turning Point: Robinson found the edge down the left sideline where his 18 yard run got him into the endzone for the game-winner.

He had some struggles in this game, but even without Graham, Brees was able to rally the Saints to a must-win game.

Jackson got things rolling with Glennon under center, allowing the young quarterback to find some consistency in a shootout game.

With Mike Evans out, Jackson is the main focus.

The Saints head into a bye week before going to Detroit on October 19. Despite the win, New Orleans needs to use the bye week to get right as they are still just 2-3 on the year.

The Bucs will host the Ravens next week, looking to get back in the win column. They have had considerably better results with Glennon under center, as he looks to claim the gig fulltime over Josh McCown.