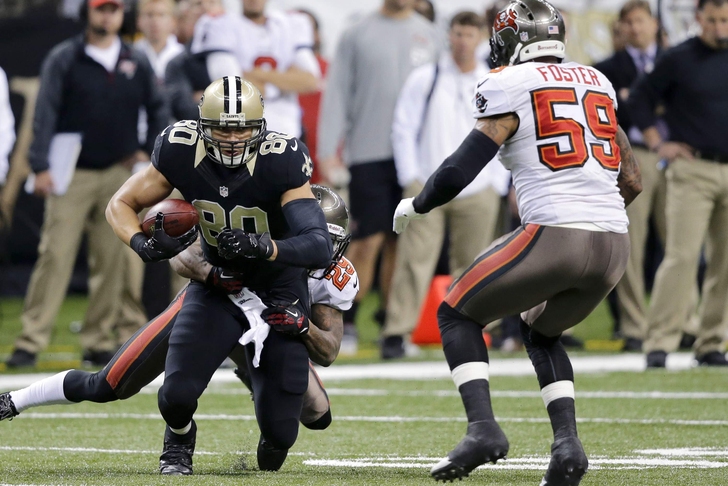 The New Orleans Saints host the Tampa Bay Bucs, in what has become a must win game early in the season.

The Saints scored a pair of field goals in the first quarter, and extended their lead with a Pierre Thomas receiving touchdown from Drew Brees, giving them a 13-0 advantage.

The Buccaneers didn't run their first play in Saints territory until midway through the second quarter, putting together very little on the offensive side of the ball. Mike Glennon promptly threw an interception on the second play inside Saints territory.

He did lead a touchdown drive after a Brees interception set the Bucs offense up inside the Saints 40 yard line, connecting with Louis Murphy to pull Tampa within three points.

Biggest Play: The only Saints touchdown of the half came on a 15 yard pass from Brees to running back Thomas. That score gave New Orleans some breathing room midway through the second quarter.

Biggest Surprise: Maybe this shouldn't be a huge surprise, but after Glennon led a comeback win over Pittsburgh last week, he has looked terrible so far today.

Glennon has completed just 10 of 19 passes for 120 yards, a touchdown and an interception.

Bucs Key Player: Vincent Jackson had three catches for 53 yards, but he was the only Bucs player who did anything in an ugly first half performance.

Who Has the Edge?

The Saints have the advantage in terms of score, but the Bucs put up the final 10 points of the half, meaning they have the momentum going into halftime.

New Orleans went up 13-0 and looked like they eased up a little bit after that. They need to turn it back on to hold off Tampa the rest of the way.