For the Saints, Success Comes in the Form of a Productive Backfield 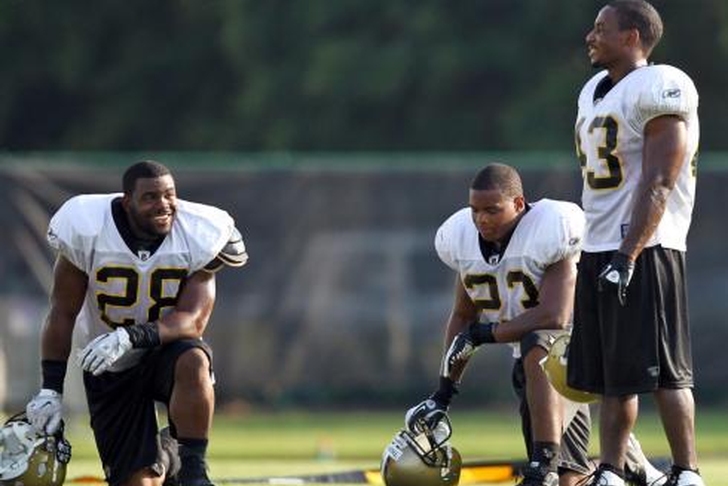 For the past five years, the New Orleans Saints have been a powerhouse on the offensive side of the football.

With the arrival of Sean Payton as head coach, Drew Brees at Quarterback, and newly-drafted Heisman winner Reggie Bush in 2006, Saints fans saw a side to the franchise previously hidden from view.  That year, it all seemed to click.  Dynamic run packages were executed, as veteran Deuce McAllister and the youthful, electric Bush teamed up to form one of the more creative one-two combos in the team’s recent history.  A new-found passing game, led by Brees himself, began to take form, as a solid core of wide receivers, young and old alike, helped provide a spark for the team’s aerial attack.  Whether it was the veteran leadership of Joe Horn or the overpowering skill-set of the gem that became Marques Colston, one thing is for certain:  Brees had his share of options when staring downfield.

In 2006, the team found themselves in a bright spot.  On the ground, the Black and Gold averaged 110.1 yds/game.  The Saints kept the ball on the ground for a decent portion of their possessions, totaling 472 rushing attempts in all.  This formidable ground game opened up holes in the defense, translating into one of the better passing attacks in football, as Brees was able to average 281.4 yds/game through the air.

This formula carried the team to an NFC Championship Game that year; however, in the seasons that followed, the team seemed to stray away from the idea of a “balanced offense.”  It wasn’t until 2009, though, that the squad rediscovered its ‘06 key to success.  And we all know how that year turned out.

So that leaves us with the topic at hand:  how has a “balanced offense” affected the success of the New Orleans Saints, and can the new additions made in the offseason help tip the scale back towards a more complete offensive attack?

To begin, let’s first take a look back in time to help answer the initial question.

Coming off of a year that had McAllister averaging 4.3 yds/carry, things were looking bright heading into the 2007 campaign.  That is until Mr. Deuce found himself riding the bench and watching from the sidelines as he rotated on and off the Injured Reserve list.  This paved the way for Bush to open the eyes of Saints fans around the country, as he now had the opportunity to show his worth in a starting role.  And that he didn’t.  He would go on to average a mere 3.7 yds/carry, and his season total would only get to the 581 mark.  His teammates in the backfield did not look much better.  Aaron Stecker, the backup to Bush at the time, averaged only 3.9 yds/carry, and Pierre Thomas, a rookie at the time, was only seen on 52 rushing attempts.  The team’s rushing yds/game:  91.6.  The squad’s total amount of rushing attempts:  392. The squad’s regular season record?  A lowly 7-9.

Now, one would have thought that the team would have learned from its ’07 woes.  Let’s just say that it didn’t get much better in 2008.  With Thomas now holding the reigns in the Saints’ backfield, he was able to average a solid 4.9 yds/carry and total 625 yards on the season.  Outside of the second-year RB, though, not much else was to be found.  McAllister and Bush managed to average 3.9 and 3.8 yds/carry respectively, each totaling just over the 400 yard mark on the year.  And although each of the three backs had over 100 carries for the season (Thomas- 129; McAllister- 107; Bush- 106), the team was only able to average 99.6 yds/game (They totaled 413 attempts on the year.).  Once again, the lack of a true rushing attack made its presence felt in the standings, as they ended up 8-8, missing out on the postseason for the second straight year.

But then good ole’ 2009 rolled around, and the squad finally got the memo.  Following their same formula from the ’06 season, the Saints found the piece of the puzzle that had plagued them for three years.  With a trio of RB’s ready to break loose, the Saints marched on through the ’09 season.  Pierre Thomas took the charge as the number one back, totaling 793 yards and averaging a whopping 5.4 yds/carry.  Mike Bell followed behind him, totaling 654 yards on the ground.  Bush held up the rear, gaining 390 yards on 70 attempts.  All-in-all, the squad averaged 131.6 yds/game (468 attempts), their highest average since their previous run in the playoffs.

So where did this formula go in 2010?  Onto the Injured Reserve, that’s where.  With Thomas and Bush oft-injured, the Black and Gold had to turn to rookie RB Chris Ivory out of Tiffin University.  Their other option?  Julius Jones.  With this one-two tandem of RBs, the Saints decided that the ground game shouldn’t be used, and rightfully so.  Over the course of the 2010 season, the Saints ran on 35.6% of their offensive plays, the lowest percentage in the NFL (This is behind notorious pass-happy teams, such as the Colts, Packers, and Patriots.).  And, in the end, although the Saints made it to the postseason, it didn’t end as many had hoped in “The Big Easy” (As a local, I’d rather not bring up that loss last season.  It just stings too much.).

So what have we learned from all of this?  Simple.  When the New Orleans Saints find a solid running game, they tend to find greater success.  And although this may be an obvious conclusion, the Saints avoided the proven plan for three seasons.

Now in 2011, an improved running game seems less like a hope, and more on the border of reality.  Sure, we can highlight the fact that they drafted Mark Ingram in the first round.  But how about the other pieces added in the offseason?  One must not overlook the addition of veteran cen

ter Olin Kreutz to the O-line.  With Jonathan Goodwin leaving for the San Francisco 49ers, the Saints jumped on Kreutz, a six-time Pro Bowler.  The message:  the Saints want the running game to work in 2011, so they went out and got the best man at the time.   Oh, and how could we forget our friend Darren Sproles, who, after spending 2010 with the top offense in the NFL (San Diego Chargers)

, gets to be reunited with his long-lost QB, Drew Brees.  The debate on Sproles’ role in the Saints’ offense will be a constant one throughout “Who Dat? Nation” up until Opening Night against the Packers, but there is without a doubt that he brings a skill-set previously unseen in New Orleans (Compare him to Bush all you like, but I honestly see him filling a different role in the Saints’ backfield.).

Looking at some of the projections from several analysts around the web, the New Orleans fan base has to feel positive about the upcoming season.  Glancing at the projections for Ingram, many seem to be high on the young RB out of Alabama, as he is expected to average anywhere between 550 and 830 yards on the ground.  Others seem to be down on the “veteran” of the group, Pierre Thomas, as his projected total rushing yardage varies anywhere between 570 and 650.  Finally, Mr. Sproles is projected to average between 275 and 400 yards rushing.  Regardless, those numbers top anything fans witnessed last season.

In conclusion, if the Saints give this trio their share of opportunities, then the Dome will surely be rocking in 2011.  If the Saints decide to use this three-headed monster to its potential, then success is undoubtedly just around the corner.