Despite Woes, Brees-led Saints could have Success in 2012 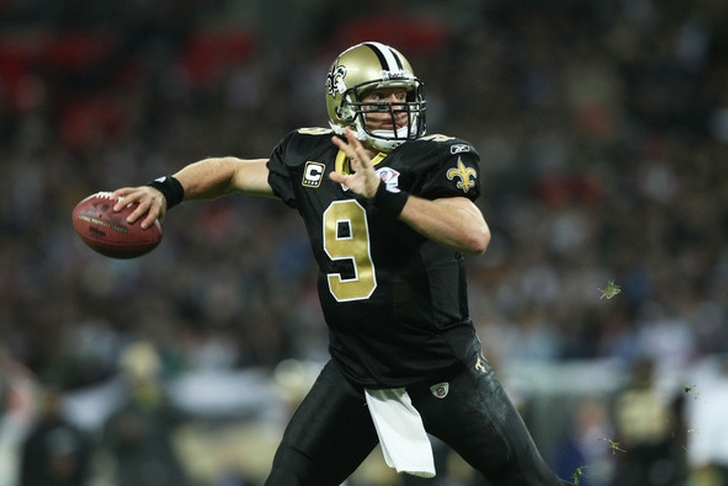 No team in modern sports history has suffered as nightmarish an offseason as the New Orleans Saints in 2012. Anyone with functioning eyes or ears, sports fan or not, who hasn't been stuck under a rock at the bottom of an ocean, is aware of the fall-out from the alleged bounty program run by former defensive coordinator Gregg Williams.

As if that wouldn't suffice to bury the Saints, the all-powerful Goodell then flexed his dictatorial muscles by handing out player suspensions, despite players' claims of a lack of evidence against them. The suspensions resulted in the season-long ouster of middle linebacker Jonathan Vilma, chief signal caller of the Saints' defense, and defensive end Will Smith (four games), among others.

So, to recap, New Orleans begins the new season without its head coach, general manager, assistant head coach, defensive captain, and best defensive lineman. In essence, Goodell single-handedly gathered an arsenal of medieval hand torches, set fire to an NFL franchise, and burned the entire village to the ground, women and children included.

With a few exceptions, national media talking heads have given the Saints little to no chance of emerging as a championship contender this season, which is not surprising. After all, basic skills of foresight simply do not permit a rational thinker to argue in favor of the Saints recovering. The losses are clearly stockpiled too high. Right?

In stealing a page from former Florida State University head coach Lee Corso's playbook, not so fast! Further analysis reveals many flaws in the so-called "experts" lines of thinking.

For starters, as Saints fans would put it, "We got Drew Brees and they don't!" There is no denying Brees' stature as one of the top quarterbacks in the NFL, as he has shattered multiple passing records in his six-year New Orleans tenure. And a Super Bowl MVP trophy gives further backing to all the statistics. In addition, his intangibles as a leader, both on and off the field, cannot be quantified. But Brees does not stand alone in this fight.

Tight end Jimmy Graham and running back Darren Sproles burst onto the scene in 2011 as legitimate NFL stars. And when Marques Colston, Pierre Thomas, Lance Moore, and Mark Ingram are thrown into the mix, there's plenty of talent and depth returning to a truly prolific offense.

On the defensive side of the ball, the Saints have made significant changes in an attempt to shore up their glaring weakness from last year's 13-3 divisional championship squad. New defensive coordinator Steve Spagnuolo, who won a Super Bowl holding the same position with the N.Y. Giants, gives the Saints a fresh, new defensive look.

There have also been several free agent acquisitions, but the key addition to the unit is former Atlanta Falcons middle linebacker Curtis Lofton, who should more than adequately replace Vilma. Lofton's signing has gone virtually unnoticed, but by all accounts he should actually be an upgrade, entering the prime of his career, and possessing more size and explosiveness than Vilma.

On paper, the Saints no doubt have a talented collection of players, but what about the other question marks popping up in the wake of the bounty scandal? What about team psyche?

This football team has no doubt undertaken an "Us against the world" mentality to the season. The Saints are as tight-knit a group as can be found, at least by professional athlete standards.

And, as if the heaping mounds of criticism poured onto the team following the scandal weren't enough motivation, the Super Bowl is in the Superdome. Yes, the realistic opportunity to play a home game in New Orleans, in the biggest sporting event in all the world, just might provide a tad bit of a spark to the players' steps in their preparation.

But all sarcasm aside, losing a head coach for an entire season is a monumental loss. There are no arguments to be had there. However, it should be noted that the Saints weathered multiple games without Payton last season, when he was sidelined with a knee injury.

So while the Saints have endured gut-shot after gut-shot this offseason, the deck is not as heavily stacked against them as a quick first glance would reveal.

If good New Orleans fortune allows, by the end of the season, Saints fans may be doing some torching of their own, Bourbon Street style. And if that's the case, Roger Goodell would be best suited to hand over the Lombardi Trophy, and leave town as quickly as possible.