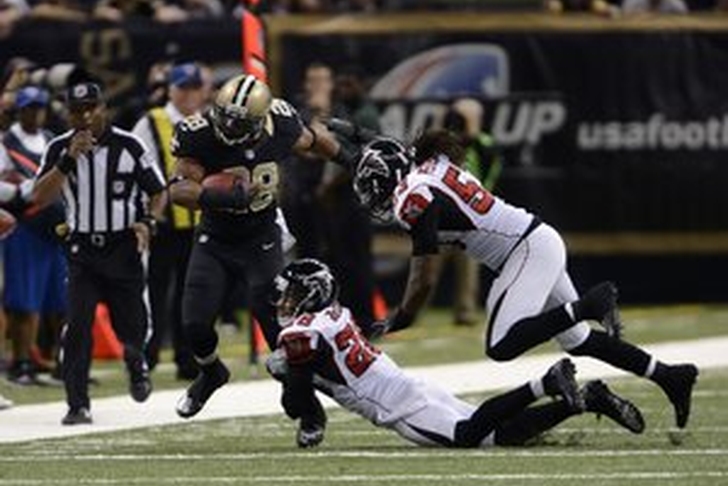 If there’s been one knock on the Drew Brees-era New Orleans Saints’ offense, it’s been that they’re often too one-dimensional.  Fans and talking heads in the media alike would suggest that while Brees and his receivers were filling up highlight films and setting records, they lacked the ground game necessary to keep defenses honest and pound out short-yardage situations when it mattered most.

Indeed, there may have been some merit to those claims.  Look at the first four games of this season: the Saints lost them all by margins of 8, 8, 3, and 1, all while ranking dead last in the league in rushing.  Would a better running game have changed the results of all of those games?  Perhaps not, but it certainly couldn’t have hurt, and very well may have flipped at least one or two.

So imagine what a relief it’s been to watch the offense these past two weeks.  Chris Ivory finally, FINALLY was unleashed, as countless Saints fans (myself included) had been clamoring for all season.  Getting his first carries Monday night against Philadelphia, Ivory turned 10 attempts into 48 yards, including a 22-yard touchdown run.  It was everything that the fans knew he was capable of, and he delivered.

If that wasn’t enough, he went even bigger for an encore, electrifying the Superdome with a 56-yard touchdown run in the first quarter against Atlanta Sunday, injecting a jolt of life into a Saints team that had quickly fallen into a 10-0 hole against the Falcons.  Ivory finished the day with 72 yards on 7 carries, playing a key role in the Saints handing their bitter rivals their first loss of the season.

[caption id="attachment_482" align="alignleft" width="300" caption="Mark Ingram is finally living up to the hype...hopefully this is just the beginning."]

And on the topic of running backs, I must also take this time to give a big thumbs-up to Mark Ingram.  I’ve been pretty hard on Ingram here, even calling for his benching on multiple occasions, but he’s redeemed himself in the past two games.  He gained 44 yards on seven attempts against Philadelphia (including a 23-yarder), and followed up with 67 yards on 16 carries against Atlanta.

I don’t know if the activation of Ivory lit a fire under him or what, but I haven’t seen him consistently run this hard and this well since he was wearing crimson.  He’s been fighting for every yard, rarely going down at the first contact, and generally looking like the first round pick he is.  Hopefully this is a sign that he’s about to start fulfilling his potential, and his days of running into the line and falling down for two-yard gains are over.

Lost in all the excitement over Ivory and Ingram is Pierre Thomas.  The team’s longtime starter has seen his touches reduced over the last few games, and that isn’t likely to get any better once Darren Sproles returns.  Thomas may well find himself the odd man out in the Saints’ backfield if Ivory and Ingram prove capable of shouldering the running load for the future, and Sproles returns to his duties as the primary pass-catching back.  Thomas could make for an interesting trade chip for the Saints in the offseason, that they could use to try and beef up their defense.

Other observations from Sunday's game:

Roddy White is still, and always will be a punk.  From his pregame comments, to his actions in game, to his postgame comments.  No class at all.  It was sweet watching him miss multiple potential game-winners in the final minutes.

The Saints defense is steadily getting better.  There's certainly still plenty of room for improvement, but they limited the number of big plays that Atlanta was able to get, and kept the Falcons out of the end zone in short-field situations several times (including the huge goal line stand in the final minutes).  Corey White and Patrick Robinson are starting to find their way, and if they continue to improve, this could be a real defense by year's end.

Historical notes: Congratulations to Marques Colston, who tied Deuce McAllister's team record with his 55th touchdown...All 55 of Colston's TDs have been thrown by Brees, moving them to a 9th place tie for the most all time, with Joe Montana/Jerry Rice and Dan Marino/Mark Duper...Jimmy Graham and Tony Gonzalez both had big games, so big in fact that this was the first time in NFL history that two tight ends each had 120+ yards and 2 TDs in the same game...the Saints are now 11-2 against the Falcons since 2006.