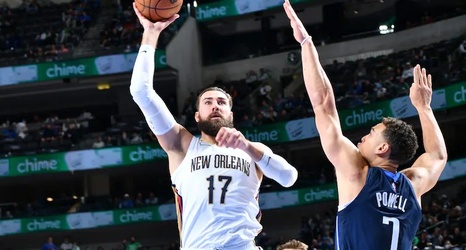 Early in his NBA career, Jonas Valanciunas was often so passive offensively that opponents did not view him as a much of a scoring threat.

“When Jonas first came into the league, he was a straight post-up threat,” now-New Orleans teammate Garrett Temple said. “(His) pump fake, (as an opponent) we used to joke, ‘Don’t go for the pump fake, because he never shoots shots.’ ”

As a Toronto rookie, Valanciunas averaged just 5.9 shot attempts per game, despite starting 57 times in 2012-13. Now a decade into his NBA career, Valanciunas fired seven three-point attempts alone in the first half Monday at Staples Center, draining all of them, en route to a career-best 39-point night.