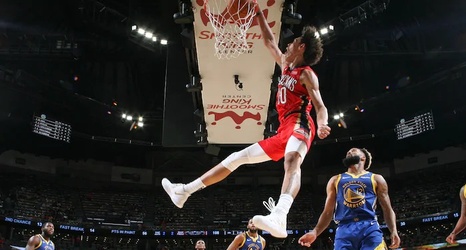 In just 24 minutes of action Monday, New Orleans fans had the opportunity to witness just about every aspect of Jaxson Hayes’ initial NBA learning curve. On one end of the floor vs. Golden State, the 6-foot-11 Hayes was reeling in passes and soaring for a handful of dunks, including one slam apiece assisted by Brandon Ingram, Lonzo Ball, Frank Jackson and Nickeil Alexander-Walker. On the other end, a 19-year-old rookie making his official professional debut was often a step behind the play. At 220 pounds, Hayes sometimes had difficulty holding his ground in the paint, preventing him from perhaps grabbing a few more caroms off the rim.